The funeral service for Marcos Torres Reyes will be at 11 a.m. Saturday at Bonnerup Funeral Service in Albert Lea. Capt. Oney Castillo will officiate. Visitation will be from 5 to 9 p.m. Friday with a memorial service beginning at 6 p.m. Interment will be in Graceland Cemetery. 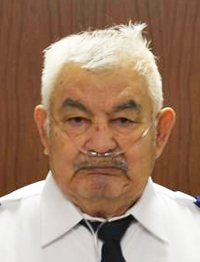 Marcos Torres Reyes passed away on Tuesday, May 15, 2012, at Good Samaritan Society in Albert Lea. He was 69 years old.

Marcos was born in Mexico on Jan. 25, 1943, to Louis and Victoria (Reyes) Torres Reyes. On May 25, 1960, he Married Lydia Ruth Moreno in Mexico. A resident of Albert Lea for the last 34 years, he worked for Con Agra in Wells, and was active in the Salvation Army. He enjoyed fishing, singing, music, travel, cookouts and spending time with his grandkids.

He is preceded in death by his parents; daughter, Maria; and great-grandson, Julian Marcos Torres Mendoza.