Mildred was born Nov. 17, 1927, in Lake Crystal, to David and Minda Christianson. She graduated from Bricelyn High School in 1947. Mildred married Robert Aukes on June 23, 1951. They had two children. They divorced in March 1961. On April 25, 1987, Mildred married Clarence Duffy. She described Duffy as the love of her life. 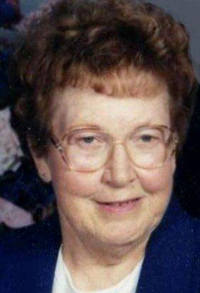 Mildred worked as a factory laborer, housekeeper and nanny until she retired. She loved being with her family and friends. Mildred enjoyed traveling with her husband, Duffy, cooking, baking, gambling and playing cards.

She is preceded in death by her husband, Clarence; parents; four brothers; one sister.

A memorial mass will be celebrated at 11 a.m. Friday at St. Augustine Catholic Church with the Rev. Jim Steffes officiating. There will be a 4 p.m. CCW rosary on Thursday at Mayer Funeral Home where friends may call from 4 to 6 p.m. Interment will be in Calvary Cemetery.

In lieu of flowers, memorials are preferred to St. Augustine Catholic Church in Austin or Taylor House Hospice in Des Moines, Iowa.