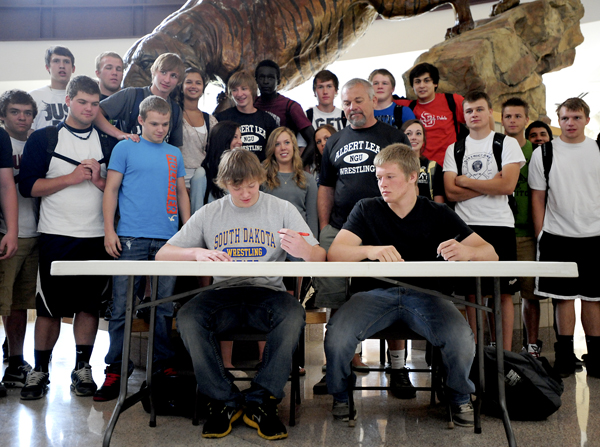 After four years of starting for the Albert Lea wrestling team, the end has come for the high school careers of Trey Hable and Dalton Westerlund.

On Thursday, the pair signed their letters of intent to continue wrestling at the college level.

According to Tigers coach Larry Goodnature, the team has won four Big Nine Conference titles while the boys were members and also were at state three out of the four years.

“They have contributed immensely to our program,” Goodnature said. “I think going off to college, whether it be Trey or Dalton, they will do the same for those programs.”

As seniors, both boys competed as individuals at the Minnesota State High School League state wrestling tournament in March and are excited to start wrestling again in college.

According to Westerlund, Upper Iowa is ranked No. 3 in the nation, but he said he’s ready for the change and the tougher workouts and competition.

Westerlund plans on going to school for accounting and Hable for ag business.

Goodnature said he’ll follow the boys’ college careers as much as his schedule allows.

“There always seems to be a weekend I can get to the schools,” Goodnature said. “Hopefully they’ll get to the national level and I can catch them there.”

Speaking for himself and for the wrestling program, Goodnature said everyone is proud of the boys for continuing to wrestle after high school.