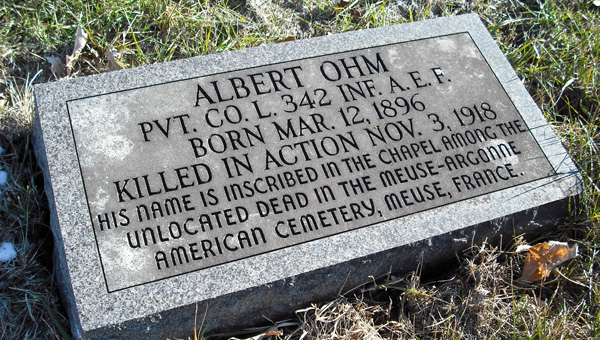 Placed in honor of Pvt. Albert Ohm of Freeborn County, the stone explained how the man was killed in action eight days before the end of World War I — but his body was never recovered.

“I found it quite intriguing as I had been interested in the First World War most of my life,” Peterson said.

From that day on, he said, he has had a desire to visit France to see the site where Ohm is believed to have been killed.

That goal came true earlier this month — 28 years after first seeing the stone — when Peterson and his wife, Mary, took a 40th-wedding anniversary trip to Europe and traveled through areas where World War I was fought. 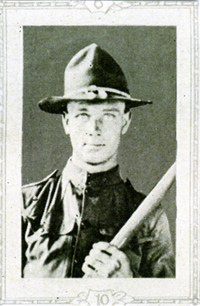 Pvt. Albert Ohm of Freeborn County was killed in France Nov. 3, 1918, the whereabouts of his remains are “known but to God.” He is one of 954 names on the tablets of the missing at the chapel at Meuse Argonne American Cemetery, Romagne, France.

Who was Albert Ohm?

Before leaving for the trip, Peterson researched Ohm and found out that, at the age of 22, Ohm was either enlisted or drafted into the service to help drive the German armies from Belgium and France.

Peterson said initially Ohm was a part of the 86th Infantry Division, which supplied replacements for combat losses in other divisions upon reaching France.

Records show that after suffering losses in the Battle of St. Mihiel in September 1918, the 89th Division received replacements from the 86th Division — one of which was Ohm.

The 89th Division and its reinforcements fought in the Battle of the Meuse Argonne, but Ohm did not make it out alive.

Peterson said Ohm is believed to have been killed in action almost immediately, suggesting that he disappeared in a “pink cloud,” a term describing when soldiers were struck directly by high explosive artillery shell and literally were blown to pieces.

A memorial service was held for Ohm in January 1919 at Concordia Lutheran, known then as Pickerel Lake Lutheran.

Peterson noted that Ohm was just a few years younger than his wife’s grandparents, who lived in the same community and attended the same church. 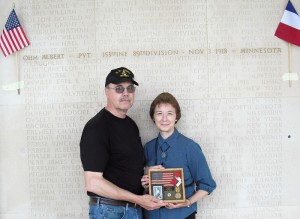 Marlin and Mary Peterson stand at the Meuse Argonne American Cemetery chapel in Romagne, France, on May 4, where they left a memorial for Pvt. Albert Ohm of Freeborn County, who was killed in action during World War I on Nov. 3, 1918. -- Submitted image

Part of the trip focused on Ohm’s regiment — the 353rd Infantry Regiment, 89th Infantry Division — and traced where the soldiers fought during the last three weeks of the war. The visit included a stop on May 4 at the Meuse Argonne American Cemetery, the largest American cemetery in Europe, with 14,246 graves and 954 more names recorded for soldiers whose remains were never recovered.

There, Ohm’s name is inscribed on the wall of the chapel.

Peterson said visiting the cemetery so close to Memorial Day, he felt compelled to leave a memorial for Ohm.

In a small wooden case, he placed a picture of the soldier, a 48-star flag, poppies from the Veterans of Foreign Wars ad American Legion, a World War I victory medal and an 89th Division enamel pin.

The case was left in the chapel at the cemetery, where it would remain until Memorial Day and then be removed for safekeeping.