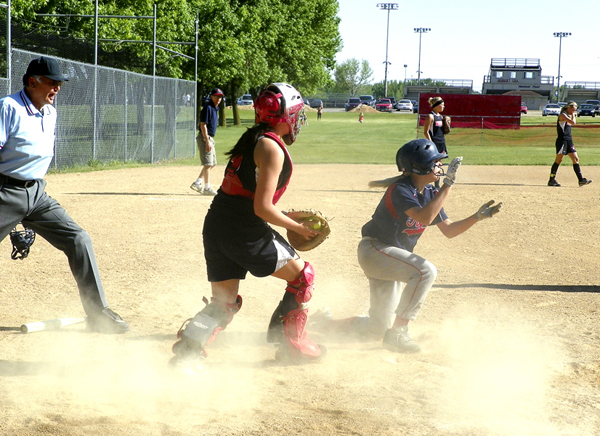 The game looked hopeful for both teams, but the Albert Lea softball team lost at home to New Richland-Hartland-Ellendale-Geneva 9-6 Wednesday afternoon. 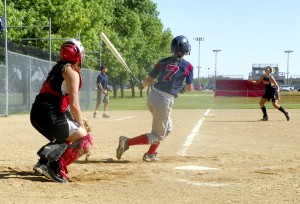 Albert Lea Tiger Devon Mullenbach hits the ball Wednesday and makes a run for first base.

In the first three innings, neither team had any runs, but that changed during the fourth inning.

“During the first innings we hit where the girls were, but it ended up pretty good. The girls really persevered through the game,” said head Panthers coach Wendy Schultz.

In the top of the fourth, Panthers’ Jade Schultz smacked a triple and brought Anna Schlaak home. Within minutes, Anna Stork hit the ball, bringing in Jordyn Wobschall and Hannah Lundberg.

The Tigers made an effort to answer the Panthers in the bottom of the fourth. Devon Mullenbach nailed a double, bringing in Claire Buendorf. Mullenbach made it to third base, but she was left stranded by the end of the inning.

“When we played Tuesday night, our defense was not as good, but today they were much more competitive,” said Tigers head coach Dan Harms.

In the top of the fifth, the Panthers claimed two more runs, but the Tigers were not giving up. During the bottom of the fifth, the bases were loaded when Buendorf went up to bat, hitting a triple and bringing Dom Villarreal and Erin Everhard across the plate.

The Panthers scored two more runs in the top of the sixth inning, and the Tigers answered back with another two runs.

The top of the seventh inning brought another two for the Panthers, and this time the Tigers could not answer.

“We got beat 9-6, but we had a lot of runners in scoring positions. We just weren’t able to bring them in,” Harms said.

The Panthers will play tonight at Byron at 5 p.m.

The Tigers will play the Byron Bears on the road, too, only they play on Monday.