Peggy Ann (Freese) Batdorf of Good Samaritan Society of Albert Lea died on May 1, 2012, at Mayo Clinic Health System in Albert Lea surrounded by her loving family. Peggy had chosen to donate her body to science. 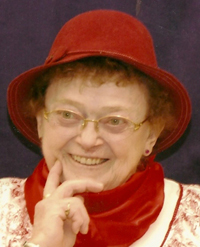 There will be a celebration of Peggy’s life at 1 p.m. June 10, at First Lutheran Church in the Bethany Hall, 301 West Clark St., Albert Lea.

Peggy was born on Jan. 11, 1938, to Ruby (Truhlar) Freese and John Freese in Austin. Peggy had a love for traveling. She had gone to California for awhile and then returned back to Minnesota. Peggy worked and retired from Telex in Blue Earth. Peggy married Richard Batdorf and they made their home in Blue Earth Minnesota. Richard passed away in 2009; after that she moved to Albert Lea to be closer to her family.

Peggy loved reading, arts and crafts, fishing, bowling and camping. She loved watching her wrestling matches on TV and spending time with her family and friends.