Peterson takes 2nd, Tigers do too

AUSTIN — Out of 60 golfers at the Big Nine Conference tournament in Austin on Friday, Albert Lea’s Lucas Peterson shot a 76 to tie for second place.

“It feels really nice to know all my hard work paid off,” Peterson said. 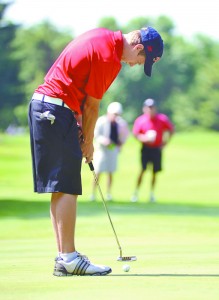 Albert Lea's Lucas Peterson putts on No. 3 during the Big Nine Golf Meet Friday at the Austin Country Club in Austin.

Will Leaf of Winona took first place with a score of 74.

The meet was held at Austin Country Club, a par 72 course.

Going into the tournament, Owatonna, Albert Lea, Winona and Rochester Century were all vying for the upper-hand in conference placing.

Winona was leading, Owatonna was second, Albert Lea was third and Century was fourth.

According to Tigers coach Riley Worth, Albert Lea fell to Winona by just four shots in the regular season and by six shots in Friday’s tournament.

“They are undefeated, but we gave them a good run both times,” Worth said.

“This is the most proud I’ve been,” Worth said of his seven years as a coach for Albert Lea.

Pending official All Conference results, Worth said there are Tiger athletes that will receive the title.

Sections are scheduled for Thursday.