Progress: A moose of a reputation … 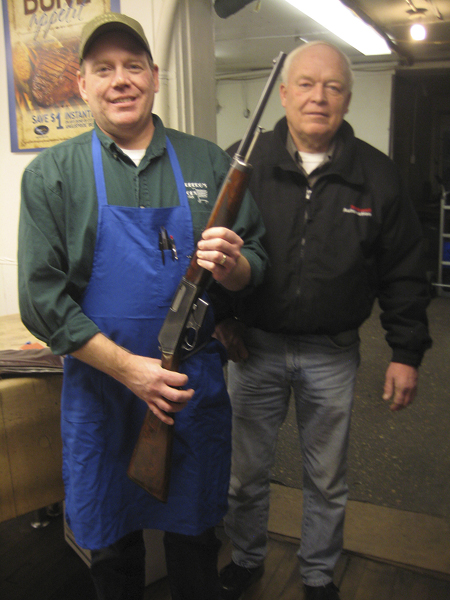 Ross Sletten, left, and Andy Lerberg hold the rifle Lerberg’s grandfather used to shoot the moose that has been mounted on the wall at Lerberg’s Food in Ellendale for over 90 years.

ELLENDALE — A more than 90-year-old moose perches above the canned vegetables at Lerberg’s Food in Ellendale, awing young children as they step into the grocery store. 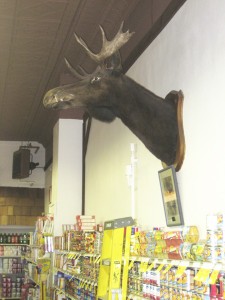 The moose, a local attraction, perches above the canned vegetables at Lerberg’s Food.

“Their eyes get big when they walk underneath it, that’s for sure,” said Ross Sletten, the store’s current owner.

Lerberg’s Food, which opened in 1901, sits off Interstate 35 and attracts customers from surrounding towns of New Richland, Geneva and Clarks Grove. The moose head, which was “bagged” in 1919, has been a local attraction ever since it was mounted on the wall the following year.

Sletten, who began working in the store at 13 years old, said he remembers his own daunted reaction as a 3- or 4-year-old when he saw the moose for the first time.

The moose, a local attraction, was shot by former owner Andy Lerberg’s grandfather in northern Minnesota in 1919 and commuted back to Ellendale by train.

Lerberg said the meat was given away and the head, which until recently also held the rifle that shot it between its antlers, was mounted in the family grocery store.

Over the years, the moose has undergone yearly vacuuming and even an eye transplant.

Sletten said back when Lerberg’s wife owned the gift shop next door, they would prank kids by alluding that the rest of the moose was sticking out on the other side.

Sletten kept the mounted moose head intact when he bought the store from Andy Lerberg in 2007.

He said he wanted to preserve the original corner grocery store, which features three narrow aisles and a wooden floor. The first store was opened in 1901 and the current one revealed in 1914, Sletten said.

“You don’t see a grocery store like this anymore,” he said.

Sletten is the first outside the family to own the store. It was opened by Lerberg’s grandfather and passed through his aunt and uncle and his parents before landing in his lap from 1972 till 2007.

Sletten “has been here so long he’s one of the family,” Lerberg said.

In May, the five-year anniversary of Sletten’s purchase of the store will come. He said he plans to hold a coloring contest for children and take suggestions for the name of the moose.