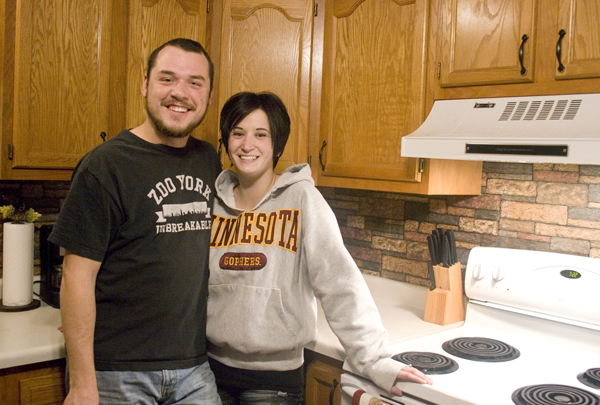 Jerrid Schindle and his fiancee, Bridget Nesse, stand in the kitchen of their home on Stanley Avenue in Albert Lea. Schindle and Nesse are first-time homeowners and purchased their house at the end of September 2010. — Sarah Stultz

After two or three months of house hunting — and seeing at least 20 different properties — Jerrid Schindle and Bridget Nesse walked into a house that struck a cord.

A simple house, at 712 Stanley Ave., it felt like home from the beginning, Nesse said.

Nesse, 24, a teller at Wells Federal Bank, and Schindle, 25, a seasonal employee through the city of Albert Lea, had been living in a duplex that was up for sale.

They said they were worried what would happen when the duplex sold, so they started looking for a new place to rent.

With two cats, a dog and a rabbit, however, they were having a hard time finding a decent property that would allow pets.

They discussed buying a house — and with Schindle ultimately knowing he was going to ask Nesse to marry him — they met with family friend and Realtor Jay Waltman of Re/Max Properties to begin looking around.

The couple said Waltman was informative but not pushy and would help point out parts of the houses that needed attention when they had overlooked them.

The Stanley Avenue house was the third-to-last house they looked at.

After they decided they wanted the house and reached an agreement with the owner, they said they signed on with a loan officer at Wells Federal Bank, who walked them through each step of the loan process in layman’s terms.

“Honestly, it was the easiest thing with her,” Nesse said.

They were able to be approved for a rural development loan program, which allowed them not to have to make a down payment or pay for closing costs, and locked in a 4.25 percent interest rate.

For just under $70,000, their monthly payment is now $475 a month, including interest and escrow.

The couple painted every room in the house before they moved in and have since installed a new floor in the kitchen and decked out the basement to look like a pub.

“It was exciting because we can do whatever we want to the house,” Nesse said. “We don’t have to ask for permission.”

They have other improvements planned for the future.

Schindle said while being a homeowner comes with its perks, it also comes with added responsibilities.

Since they’ve been in the house, they had to replace their hot water heater — an expense they weren’t expecting.

But the benefits have definitely outweighed the negatives, the couple noted.

They said they love their cozy house, which is not far from Fountain Lake and in a good neighborhood.

July 2010: Schindle and Nesse began looking to buy a house. After seeing at least 20 houses, they found one they liked.

Oct. 1, 2010: The couple started moving items into the house and painting each of the rooms.

Quick tips
Schindle and Nesse’s tips for first-time homeowners:
• Don’t rush. You’ll know what you like when you walk in the door of the house.
• Have fun with your house search. Look at as many houses as you choose.
• Look at the possibilities of the house. Remember, a room can be repainted if it needs to be, and it will look completely different with your own furniture and decorations in it.
• Make sure you have a loan officer who will help you understand what you’re doing.
• Find a Realtor who is informative but not pushy.
• Don’t strain yourself on your mortgage payment.