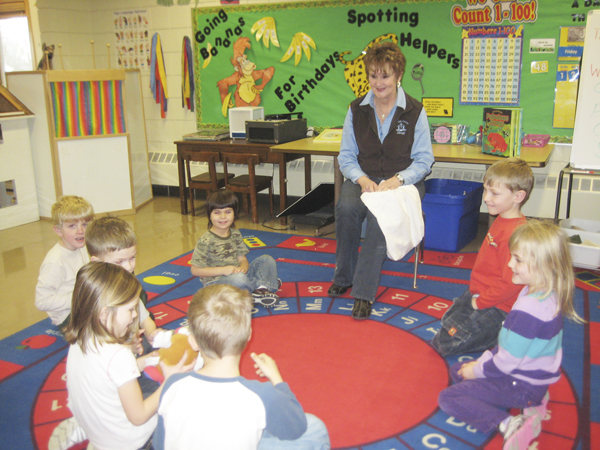 Deb Louters sits with her kindergartners in a circle in early January. They use “letter people” to learn the alphabet. — Jill Jensen

HOLLANDALE — “What’s special about Mr. N?” Deb Louters asks her kindergarten class, as she holds up a doll plush, complete with a bike horn for a nose. 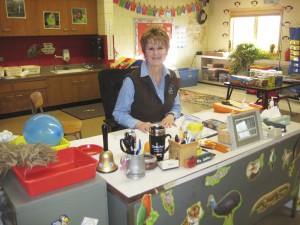 The “letter people” made an appearance at the end of her Jan. 6 all-day kindergarten class to reinforce the letters her students have learned thus far.

A new doll, whether it be Mrs. I (itch) or Mr. F (funny feet), is introduced each week to teach students the alphabet.

She said her class is like a “typical kindergarten,” except they have Bible readings and throughout the day talk about their values — why God wants them to do this or that.

“We embrace our kids with love because Jesus loved us first,” Louters said.

She said a Christian school also allows children to have other Christian adults as role models, one of the reasons she and her husband Pete sent their own kids to Hollandale Christian School.

Louters demonstrated that Jan. 6, as seven kindergarteners attempted to transform white paper into snowflakes. She explained why it’s OK if snowflakes aren’t “perfect” or why they aren’t exactly the same.

“It doesn’t matter if our snowflakes are different because God made us all different,” she said.

Louters graduated from Albert Lea High School in 1957 and attended Northwestern College, where she graduated with a bachelor’s degree in education in 1971.

She said she has aways known she wanted to be a teacher.

“I just have a passion for little children,” she said. “They love school. They love to learn. They love their teacher. I really love it.”

She even had two of her children — Phil and Kim — in her classroom.

“They always called me… teacher,” she said.

She said kindergarten, which runs all day on Mondays, Wednesdays and Fridays, was perfect for her to be home and raise her family the remaining days.

Now that her children are all grown up and have children of their own, Louters spends her free days reading and gardening.

She said because she can’t be near her 11 grandchildren as often as she wants to be, her kindergarten class is like a “little family here.”

When students walk into the kindergarten room, they see vines dripping from the ceiling and a wooden play structure dubbed “the jungle hut” in the corner.

Louters decorates her classroom each year with a different theme like the ocean or bugs. She said teaching kindergarten gives her the chance to be creative.

Though she recollects many different activities — nap time, the letter people, being a dandelion in the spring musical — from her kindergarten year, she said the most important lesson Louters taught was who Jesus is.

“I didn’t know it back then, but I’m so grateful to have started my faith journey at such a young age,” Thompson said.

She said she stops by each year to visit Louters, who was “the perfect kindergarten teacher.”