Progress: Setting a course for success 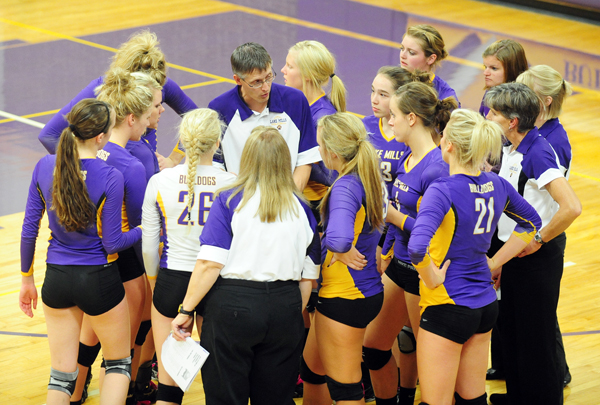 Lake Mills volleyball coach Jim Boehmer speaks with his players during a game in the fall of 2011. — Andrew Dyrdal/Albert Lea Tribune

LAKE MILLS, IOWA — For the last 14 years, kids as young as fourth grade have been able to give volleyball a try in the Lake Mills school district.

Lake Mills volleyball coach Jim Boehmer and Stu Vold, from Mason City, started the Northern Lights volleyball league to introduce girls in fourth through sixth grade to the game to let them succeed and have fun while trying it out before it gets to the competitive stage.

With about 120 girls playing volleyball last season in grades four through 12, the program seems to be working.

To have success while playing, the rules are tweaked depending

on the grade level.

“We try to adjust the rules so they can feel good about what they’re doing,” Boehmer said. “We can teach them the correct technique if we move them up so they can get it over the net. If we try to have them back up all the way, then their technique breaks down.”

The net is lowered and the serving distance is changed depending on the grade levels. Also in the fourth grade, the girls use lighter balls. During games, no statistics but the score are kept and that’s simply to know when to rotate. Boehmer said during rotation every girl plays every position, one girl in and one girl out.

In spite of what other coaches believe about long practices being better than short ones, Boehmer has shortened practices for the younger players to 45 minutes instead of a typical 90. He said if it’s less than an hour, it keeps them excited to come back; they don’t go home thinking about how exhausted they are.

“If I hear, ‘Are we done yet?’ I know I’ve practiced too long,” Boehmer said. “I want them to get in the car and complain to their parents this way, ‘He didn’t let us hit. We better get to do this next time.’ That sounds like a kid who wants to be there.”

With up to eight teams of fourth-, fifth- and sixth-graders, the gym can seem like a madhouse at times.

But with the help of assistant coach Ree Pederson-Moore and the high school volleyball players, it becomes an organized event. The volleyball season for the fourth- through sixth-graders lasts about five weeks with a goal of two practices a week.

“Last year, we had almost 90 percent of all the girls in the fourth-, fifth- and sixth-graders on a youth volleyball team,” Boehmer said. “That’s the number I’m most proud of with my whole program. It’s supposed to be for the kids.”

As the girls get older, the rules conform more closely to regulation volleyball, and girls begin to figure out whether they want to continue with the sport.

“That’s for them to decide,” Boehmer said. “Just like an elective class, they have to decide what they want to take. It should be their choice. It gets hard enough for them later on in high school when competing for playing time is a whole new ball of wax.”

By the time they are seniors, the girls who started volleyball when they were in fourth grade will have played nine seasons of volleyball. They literally will have touched a volleyball hundreds of thousands of times.