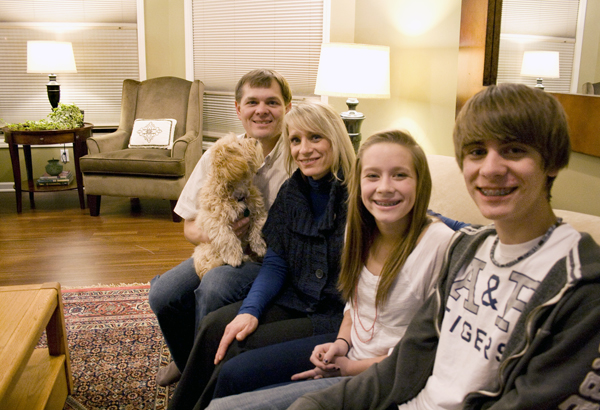 Spend an hour with Albert Lea Mayor Vern Rasmussen, his wife and two children and you can quickly see they’re much like any other family with teenagers.

Between school, work, extracurricular activities, friends and other hobbies, they’re a busy family with busy schedules.

On an average weekday night after school and work, they arrive home at about 5:30 or 6 p.m., eat dinner together and then head out to another activity or start on homework.

On the rare occasion they don’t have something going on, the family enjoys watching sports games on television or just spending time together at their home overlooking Edgewater Bay.

“When you’re busy, you just kind of relish the time to just hang out,” Vern said.

Vern, a physical therapist for Mayo Clinic Health System at Health Reach, has been on the City Council for seven years. Most weekdays, for an hour or two, he goes up to City Hall after work to deal with city business.

He said he is a big Gopher football fan and follows Albert Lea and Minnesota sports.

His wife, Marilyn, is a compliance coordinator at Mayo Clinic Health System in Austin. She’s worked with health care laws and regulations for the past 15 years.

Marilyn is also the president of the Albert Lea Girls’ Basketball Association and the assistant coordinator of the Twin Lakes 4-H Club. She enjoys vegetable gardening and is a member of a book club.

The couple’s oldest child, A.J., is 16 and is a junior at Albert Lea High School. In addition to typical teenage boy interests such as his car and his friends, A.J. is interested in computers and runs track. He is a member of the robotics team at the high school and works part time at Wedgewood Cove Golf Club during the summer and at the Rock Gym.

He is beginning to look into colleges to attend and is considering a major in computer engineering.

Katie, 13, is an eighth-grader at Albert Lea High School who plays basketball and soccer. She has gotten involved with Youth in Government, enjoys being with her friends and even raises a pig at a friend’s farm for 4-H.

She said she also enjoys photography, and her favorite subject is math.

As a family the Rasmussens enjoy boating in the summertime.

“We’re just like any other family,” Vern said. “We have all the same issues, all the same goals. We’re pretty average.”

A.J. and Katie said not much has changed in their lives since their dad became mayor in November 2011, but they have been able to learn a lot about city government and meet many people they would not have otherwise.

“The kids really haven’t known anything other than him being involved in city government,” Marilyn added. “It’s part of our family.”

“We just really are very thankful for the opportunities we have — for Vern to be involved with the city and for us to do meaningful things involving the youth.”