Funeral services for Robert James Holecek of Glenville will be at 11 a.m. Friday at the Round Prairie Lutheran Church. The Rev. Kent Otterman will officiate. Visitation will be from 5 to 7 p.m. Thursday evening at the Bonnerup Funeral Service, and one hour prior to the service at the church. Interment will be in the Round Prairie Cemetery. Military honors will be accorded by the Albert Lea area veterans groups. 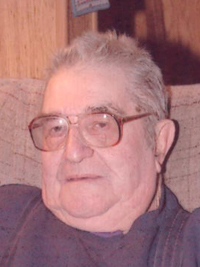 Robert was born July 9, 1923, in Hayfield, Iowa, the son of James and Lucille (Mertz) Holecek. He graduated from Hayfield High School in 1940. In 1942 he went to work for the Rock Island Railroad as a welder on the bridge and building crew. In 1945 he joined the U.S. Army and served in the 596th Engineer Battalion. He stayed during the occupation in Okinawa until his three-year term was up. Robert then joined the U.S. Army Reserves and when the Korean War started he served with the 4th Signal Battalion for two years.

Robert was united marriage to Rosie Oudekerk on Sept. 11, 1952, in Hollandale. Together they bought a small farm near Glenville. Robert was employed by the Kepple Implement Co. for 10 years. He then went to work for the Continental Foundry in 1963 and retired in 1986.

Robert was an active member of the Round Prairie Lutheran Church. He enjoyed fixing and overhauling tractors for neighbors, loved gardening, puzzle books, watching TV westerns and game shows, visiting with family and friends and telling stories about his army life. He enjoyed his pets, especially his little dog Lexie.

He was preceded in death by his parents; daughter Irene Kay; and two sisters Ione and Vivian.