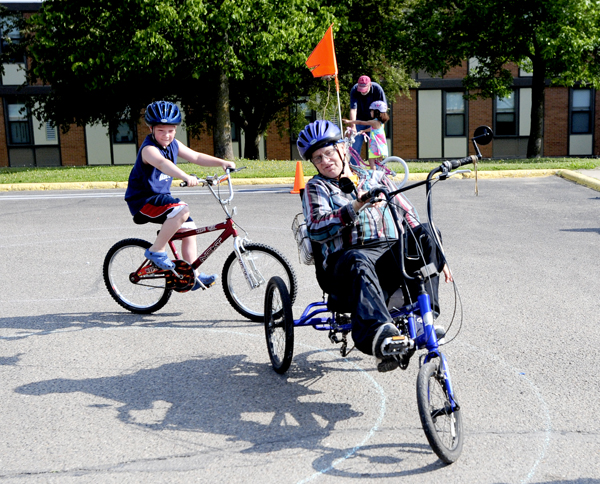 Robert Shuck, 70, and his grandson Dylan Shuck, 7, practice riding close to each other without colliding on Saturday. -- Brandi Hagen/Albert Lea Tribune 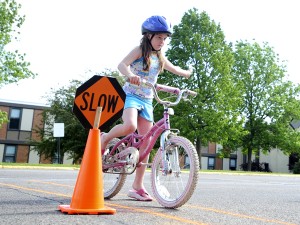 Madaylnn Baas, 8, of Geneva goes through the obstacle course.

The rodeo was free for children and adults.

Participants brought their bicycles and helmets to the event and learned about the rules of the road and how to handle a bike.

The event began inside the school where riders were fitted for helmets and learned the proper ways to use a bicycle, such as wearing proper footwear and the correct way to wear a helmet.

Donated by the Freeborn County Medical Society, about 150 helmets were given away to riders.

Once the participants were finished inside, they made their way to the parking lot to get their bikes tuned up by Martin’s Cycling & Fitness and then on to an obstacle course. 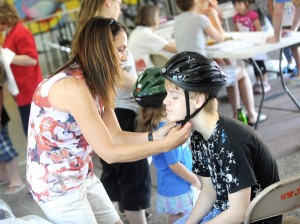 Riders learned how hard it is to ride a bike slowly when they participated in a slow race in which they had to make it to the finish line last without touching their feet to the ground.

They also practiced driving in a figure-eight shape while avoiding other riders.

Participants learned if they were 10 or older they were allowed to use the bike lanes on the road. If they weren’t, they learned they have to stay on the sidewalk unless they are with a guardian.

Albert Lea police officer Tim Harves led a group of bikers from the middle school to Korner Mart while using the bike lane.

“It teaches them that when they’re in the road, they must abide by the same rules that cars do,” Harves said. “And, it’s an introduction to the concept of bike lanes.” 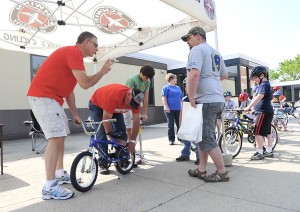 The oldest participant was Robert Shuck, 70, who brought his grandchildren.

He said he told his 7-year-old grandson Dylan that he too was 7.

“I’m only seven because zero is nothing,” Shuck said.

In addition to the learning, Sam’s Club donated a bicycle to be given away. Four-year-old Albert Lea resident Ji Yun Chung will be the recipient.