A local couple is excited about a new opportunity to support a disease they’ve been living with for 24 years.

Ray and Anne Troska, of Alden, have been involved with the local support group for those affected by Parkinson’s disease. The group is now called the Southern Minnesota Parkinson’s Support Group. 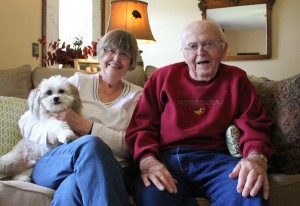 Ray and Anne Troska pose for a photo in their home with their dog, Teddy. The Troskas have been involved in the local Parkinson’s disease support group since its inception. -- Kelli Lageson/Albert Lea Tribune

That group has decided to hold a local walk to raise funds for research, education, respite care and more.

“We knew there was a walk in Minneapolis, but most of our group wouldn’t go,” Anne said. “We thought it’d be good to try one right here to raise awareness of Parkinson’s in the community.”

The event will be from 9 a.m. to noon on Saturday at the Northbridge Mall in Albert Lea. People interested can join a team or just stop out to support the cause. Anne said they’d be gathering in the former Vanity storefront, and people can come there to visit or to learn more about the prizes available. Anne said many local merchants have donated items for a silent auction. There will also be refreshments.

Donations will go to the local group, the American Parkinson’s Disease Association and the National Parkinson Foundation Minnesota.

Anne said having the support group locally has been such a blessing to their family. She and Ray were some of the original members, but the group has exploded with many more members who either have Parkinson’s or with caregivers for those with the disease.

The group used to just have members from the Albert Lea area but there were people in surrounding communities who joined as well. So now the group has named itself the Southern Minnesota Parkinson’s Support Group to show they’re inclusive of anyone who’d like to come.

“We thought the name would be more inviting,” Anne said.

The group’s first meeting was in November of 2009, and Anne said since then they’ve had meetings at 9:30 a.m. the fourth Tuesday of each month at the Senior Center in Albert Lea. Anne said whenever they host programs or speakers, all the members come away with more information about the disease. But most often the meetings are helpful to members when they can talk about their symptoms and other aspects of the disease.

“The No. 1 thing is that people can talk to each other,” Anne said.

Ray was diagnosed with the disease in 1988 and has lived with it for 24 years. Anne said some of the best advice they got was not to look up everything about the disease because it can affect people so differently. While she knows this approach wouldn’t work for some people who would rather know everything they can, it worked for them for quite a while. They were able to travel, and Ray kept working for 10 more years. Ray was lucky that the disease progressed slowly, but now he’s been experiencing more problems.

“The first thing you do is panic when you hear the diagnosis, but you don’t know what will happen to you,” Anne said. “There’s still life after a Parkinson’s diagnosis.”

Anne said some of the most powerful meetings for her have been the ones where they talk about specific medications and new surgeries.

For more information about the event on Saturday call 373-1808. The public is invited to make teams or make signs and posters and support friends and family members who have Parkinson’s.