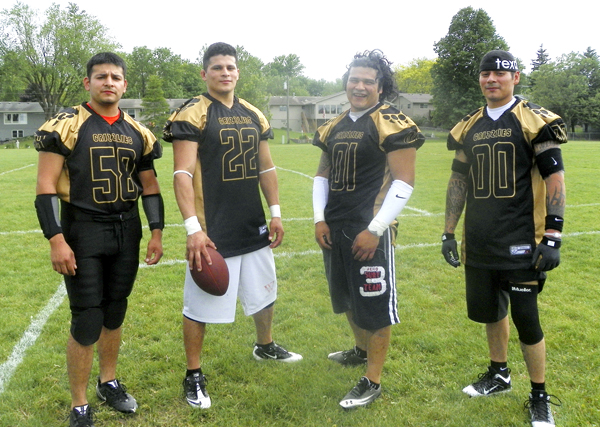 Most athletes do not have the chance to play on the same team with three of their brothers, but the four Salinas brothers are fortunate.

All four of them have been playing football since elementary school and began full contact football when they were 10. The Albert Lea Grizzlies gives them a chance to continue playing football, only this time they are together.

“It is really nice being a part of Albert Lea even though we are from Blooming Prairie, and we want to thank the community, school and everyone else for supporting us here in Albert Lea,” Mikey said.

When Steven played football at college he said it felt like he was alone because he did not have his brothers on the field with him. He had gotten used to having at least one of them with him.

Steven and Robert said playing together motivates them to continue playing and to perform well on the field.

“Being the youngest motivates me,” Mikey added. “It makes me try to be better than my older brothers.”

The Salinas have always been close as a family, but playing football gives them one more activity to do together, Steven said.

“We were raised with a closeness, to protect one another,” Robert said.

The brothers’ parents attend their games to support them and have always been their motivators on and off the field. While growing up their parents taught them to not be quitters.

“When Dad comes to our games, everyone knows who he is because he is always cheering for us,” Mikey said.

Not only do the Salinas have fun playing football together, they have learned valuable lessons and used those lessons on and off the field.

“From playing football I have learned hard work, teamwork and dedication,” Mikey said. “I know it sounds like a cliché, but it is all true. In order to be a good player, you have to have these qualities.”

Although the Salinas are brothers by blood, they respect all of their Grizzlies team members and said the entire team is a brotherhood.

“Everyone on the team is a Salinas brother,” Mikey said, grinning from ear to ear.