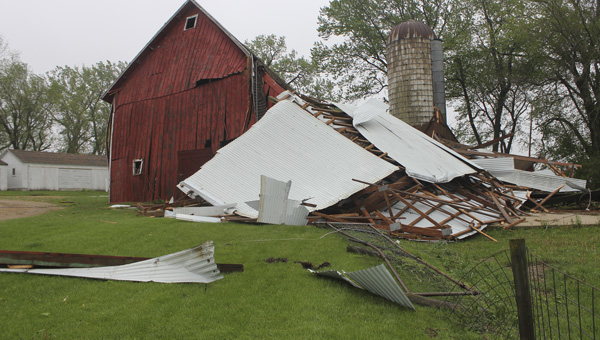 A farm building blew over Friday evening on the farm belonging to Glenn and Cindy Scherb north of Kiester. -- Tim Engstrom/Albert Lea Tribune

KIESTER — A weak tornado demolished buildings on a farm Friday near Kiester and toppled trees in the area.

The barn and several sheds were damaged on the farm of Glenn and Cindy Scherb at 4430 State Highway 22. The house survived, but it had windows out, siding and gutter damage and a lack of power. 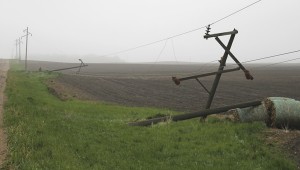 Power poles were down Saturday morning along gravel 50th Street north of Kiester in Faribault County as a result of a severe thunderstorm Friday evening. -- Tim Engstrom/Albert Lea Tribune

Faribault County provided a generator for the couple. They stayed in their house overnight.

Glenn said Cindy was away Friday evening, and he was coming in from planting in the field. He went to the large machine shed, then into the house. He looked out at the garage, then noticed a wall of water and things began to fly. The tornado, he said, sounded like a freight train, just as people say.

From his farm he can see a grove damaged by the path of one of the tornadoes that struck the Kiester area in June 2010.

Glenn said he had planned to bring down some of the older buildings on his farm.

“This made the decision for me,” he said. 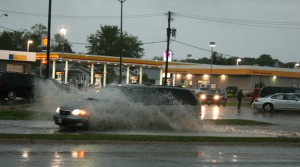 A van travels through high water Friday evening on Main Street near the intersection with Clark Avenue after a storm passed through the area. -- Sarah Stultz/Albert Lea Tribune

He said he lived on that farm for his entire life and remembers playing in the hayloft of the downed barn as a boy.

The storm was strong enough to toss a 200-pound fanning mill from the loft of an old granary north about 250 feet.

On Saturday morning, he said he planned to spend the day cleaning the farm and getting the power running.

A mile north of the farm, eight power poles were snapped along gravel 50th Street. ITC crews were out Saturday morning repairing the four downed poles on the south side of the road. The poles on the north side belonged to a different provider.

The National Weather Service issued a tornado warning for Freeborn and Faribault counties. Sirens in Albert Lea sounded to alert residents. The warning for Faribault County ended at 6:30 p.m. Friday. The one for Freeborn County was canceled at 6:45 p.m., and a severe thunderstorm warning was in place until 7 p.m.

Rotating clouds in western Freeborn County and eastern Faribault County. Power was out for some in the Kiester-Bricelyn area. No injuries were reported.

There were reports of a second farm being hit south of Kiester in the Scarville, Iowa, area.

Eugene Jacobson resides about a half mile west of Kiester. He said he returned home about 20 minutes after the storm passed and found downed trees on the train tracks that pass his home. He hitched up a horse and began dragging the branches off the tracks. By 9 p.m. a train stopped east of Kiester and sent a rail-modified truck ahead to scout for trees on the tracks.

Another severe thunderstorm warning was in place for Mower County for until 7:30 p.m. A storm front continued south into Iowa and brought menacing storm cells that delivered heavy rain and, in some places, hail.

A strong storm cell in the front moved near Bricelyn, Kiester, Conger, Twin Lakes, Glenville and Myrtle. Heavy rains also fell in Alden and Armstrong. The storm grew weaker as it headed eastward. Albert Lea received heavy rain but no reports of hail or downed trees. There was flooding on Main Street near Godfather’s Pizza.

Click here to see a gallery of photos from the storm damage near Kiester.

Readers are welcome to send in storm photos anytime they encounter severe weather in the Albert Lea area. Send them to weather@albertleatribune.com.