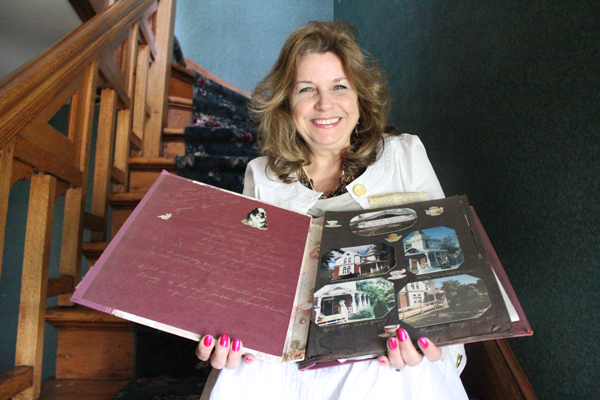 Gwen Reiss sits in the stairs of the Turtle Dove home and shows a scrapbook she made of all the work that had to be done on the home when she first purchased it. -- Kelli Lageson/Albert Lea Tribune

A historic home in Albert Lea just changed owners — what was formerly the Turtle Dove Tea House & Gardens is becoming a residential home once again. 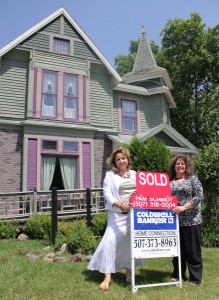 Gwen Reiss and her Realtor Pam Schmidt stand in front of the home at 510 W. Main St.

Gwen Reiss of Ellendale has owned the home at 510 W. Main St. since 1996 and opened up her business in 1997. Many Albert Leans remember the Turtle Dove with its coffee shop, gifts, unique decorations and the special events it hosted.

But it wasn’t always so beautiful. Reiss said when she purchased the home it was being used as a boarding house of sorts, with many of the rooms made into tiny apartments. It was also in serious disrepair.

And work she did. They added a handicap ramp and made sure it matched the woodwork on the deck. They made a coffee shop area, redid the kitchen area and created his and hers bathrooms on the main level. Rooms upstairs were transformed into the gift shop, and many will remember the Christmas tree room with its walls painted like a forest.

The Turtle Dove hosted regular murder mystery dinners, tea parties for all ages, Halloween parties and more. It finally closed in 2008, which Reiss said was because of the economy. 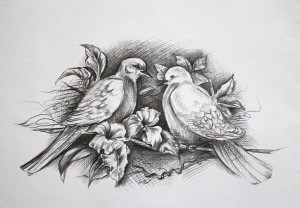 Gwen Reiss said many will recognize this drawing that was used as the basis for the logo of the Turtle Dove Tea House & Gardens.

She has a scrapbook that’s bursting with photos of weddings and other events hosted at the Turtle Dove, but she’s also done some research on the house itself. Reiss said she was always curious about the house, and guesses it’s one of the oldest in the city because it was built in 1880. She has the original deed to the house, which says it was owned by Christian Hedensted, a Norwegian jeweler. The home was originally just south of where it stands now, but was moved in the 1930s when the city extended Main Street and drained Spring Lake (now Morin Park) into Fountain Lake.

“They used an 18-horse hitch team and logs to move it,” Reiss said. 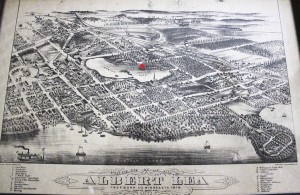 Gwen Reiss had this map framed and added a red sticker to show where the Turtle Dove house was originally. What was Spring Lake was drained into Fountain Lake so Main Street could pass through, and Morin Park was created. The Turtle Dove house also had to be moved as it was directly in the middle of what is now Main Street.

While she owned it and fixed it up she was careful to keep the history of the house. She uncovered wooden floors and painted over wooden banisters, and whatever was too far gone she had recreated in the exact same style. And while she’ll miss the house, she’s also ready to move on.

“I said goodbye to the old girl a while back,” Reiss said. “She needs to go to a new family.”

The Victorian home was on the market for a few years, and the most recent list price was $49,000. The house closed today and the new owners hope to start working and moving in almost immediately, and Reiss is glad someone will be in it and taking care of it.

“I was just honored to own her,” Reiss said.

Soon the home will be full of a large family, and they’re not planning to start any business out of the house. Albert Lean Julie Cincoski and her fiancé Lennie Aguilera purchased the home and said they were intrigued by how it had five bedrooms. 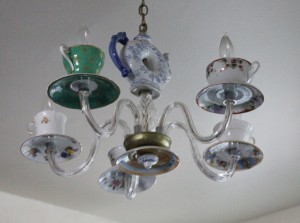 Former owner Gwen Reiss said that while she wanted to keep a lot of the artifacts of the home, some things she just didn’t have a place for like this chandelier she made herself out of old saucers and teacups.

“I’ve just always had my eye on it,” Cincoski said.

“We have a lot of kids so it’s the perfect amount of space,” Cincoski said. “We like the open floor plan.”

She said they hope to start work this weekend on the bathrooms to add a tub and showers and to work in the kitchen so that they can start moving in. Cincoski said she understands the community is curious about what the home looks like and she welcomes people to stop by this weekend to look around before it becomes their home.

“Someone told me I should lock my doors so people don’t just come right in thinking it’s a business,” Cincoski said with a laugh. 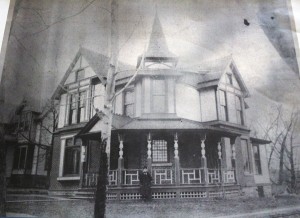 Gwen Reiss also has this photo of the home, which she thinks was taken around the late 1930s. Reiss said the girl in the picture is Clara, the daughter of the original homeowners.

They’ll be starting some work on the home Friday evening, Saturday evening and Sunday afternoon, and Cincoski said people are welcome to come take a look. After that they’ll be moving in and starting to work on other areas of the home. Though they might not tackle it right away, Cincoski said they know the roof and siding likely needs to be redone.

There are many things about the house that Cincoski loves and has plans to change, like the flooring. She said her son is also excited about what was formerly the Christmas tree room because he thinks it will feel like living in a forest.

And while Cincoski has seen the home many times over the years, she said she doesn’t know much about the history of the home. Once they get settled she’d like to start learning more about it. She was mostly drawn to the home for its size, beautiful gardens and unique look.

“It’s perfect for my family, and it’s gorgeous,” Cincoski said.