As many as 5.4 million Americans currently have Alzheimer’s. That number could grow to as many as 16 million by 2050 unless effective treatments or preventive strategies are found. The disease affects about one in eight individuals over the age of 65, and nearly 50 percent of those over 85. In addition, as many as 200,000 individuals have younger-onset Alzheimer’s, which strikes individuals in their 50s, 40s and even 30s. 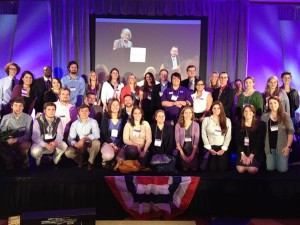 Amanda Weiss is seated in the center with other Minnesota Young Champions at the national Alzheimer’s dinner. -- Submitted

Currently the youngest person with Alzheimer’s disease is age 28. This disease no longer affects the old — it affects all ages. Minnesota has a strong Young Champions group that I’m currently a member of. The Young Champions group is a diverse group of emerging leaders who are dedicated to changing the face of Alzheimer’s disease and related dementia by engaging their peers and raising awareness across generations. I am committed to eliminating the stigma around Alzheimer’s and related dementia, raising funds to provide help and hope to those affected, and advocating for change at the state and federal levels.

While at the forum I attended the young advocates program. At this program it was people ages 18-35 in attendance. More than 130 people in this age range came to D.C. to share their voice in the fight to find a cure for Alzheimer’s. Many of these individuals have had parents or grandparents affected by the disease. Following are some statistics we learned:

• One in eight older American’s has Alzheimer’s disease.

• Alzheimer’s disease is the sixth leading cause of death in the U.S.

• More than 15 million Americans provide unpaid care for a person with Alzheimer’s or other dementia.

• Every 68 seconds, someone in America develops Alzheimer’s

While at this forum I learned how to advocate about Alzheimer’s disease, and we learned about what corporate America is doing to help improve early detection of Alzheimer’s disease in order to reduce costs, increase access and improve quality of life of all those impacted by Alzheimer’s care globally. At this forum more than 700 people attended and all 50 states were represented along with Canada and someone from Alzheimer’s Association International.

On April 24, I attended a national Alzheimer’s dinner in Washington, D.C. At this event the most influential and respected political, business, entertainment, media, social and advocacy leaders gathered to celebrate in the advances in the fight against Alzheimer’s and to rally around the growing movement to end the disease. Pat Summit was in attendance and spoke at the event about her battle with Alzheimer’s disease. Her son, Tyler, was also by her side. Summit was the head basketball coach for University of Tennessee and is the all-time wins leader among college basketball coaches. She coached for more than 38 years. Summit was awarded the Sargent and Eunice Shriver Profiles in Dignity Award. Maria Shriver was there to present the award to Summit and her son.

April 25 was a busy day in Washington. All the state representatives went and visited the state capitol to do congressional visits. First we stopped at Sen. Al Franken’s office. Every Wednesday he offers breakfast at his office. It was porridge and the recipe came from Hell’s Kitchen in Minneapolis. At this breakfast he talks about what he’s currently working on and what he plans to keep doing in the future.

Next we visited with Tim Walz and Leah Rosales, his legislative assistant, about health care. At this meeting I was able to share my story about why I’m involved with Alzheimer’s disease. My grandpa, Wayne Weiss, was 52 years old when diagnosed with Alzheimer’s and passed away in 2005 at the age of 68. This disease not only affected him but affected everyone around him. The last four years of his life he did not know who anyone was, was blind and crippled, unable to eat solid food or do any normal function a typical person takes advantage of.

Walz is one of many who has signed on to co-sponsor the “Hope for Alzheimer’s Act.” This act would improve diagnosis of Alzheimer’s disease and increase access to information, care and support for newly diagnosed individuals and their families providing essential support for those facing this devastating, debilitating disease. The act would also ensure the diagnosis is documentation in the person’s primary medical record, enabling health care providers to anticipate and prevent potential complications in the management of other conditions and allowing for care coordination among treating physicians.

After the visit with Walz we met with Reps. Collin Peterson and Betty McCollum, Sen. Amy Klobuchar and with Renee Doyle, the legislative assistant for health care for Rep. Michele Bachmann. At all of these meetings different people from my group shared their personal stories and why it’s important to find a cure for Alzheimer’s and that research dollars are needed.

The important thing to remember when on Capitol Hill and talking about Alzheimer’s disease is that this doesn’t affect just one party or the other. It affects the world. More and more people have a family member who has the disease or knows someone around them who has it.

In 2010, nearly 15 million family members and friends provided 17 billion hours of unpaid care for people with Alzheimer’s or other dementia.

For Alzheimer’s disease to be cured we need to advocate for accelerating the development of more effective treatments, more research and do this as quickly as possible because the number of people affected is currently rising and younger and younger people are diagnosed. There is no cure for this disease and no survivors who can share their story. For Alzheimer’s disease the diagnosis is hell and death is relief.

A worldwide effort is under way to develop improved treatments for Alzheimer’s symptoms, as well as treatments to prevent, slow or stop the disease.

This September I will be walking in the Memory Walk to help find a cure for Alzheimer’s disease; it is held in Mankato. It will be the second year that my family has walked in this event. We raised around $500 last year for the event, and I hope to raise even more this year. It’s also a dream of mine to have a Memory Walk in our community in the future.

Amanda Weiss is the office administrator at United Way of Freeborn County in Albert Lea.