According to the Minnesota State Patrol, Evelyn Daniels, 44, and Jaquan Jones, 13, both of Milwaukee, Wis., were treated and released from Mayo Clinic Health System in Albert Lea.

The State Patrol listed Daniels as the driver and Jones as a passenger of a 2011 Nissan.

According to the report, the Nissan drifted to the left and drove into the median after which Daniels reportedly lost control and rolled. 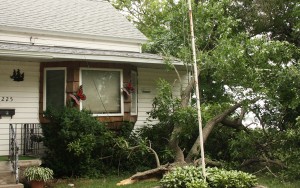 A portion of a tree at 1225 Frank Hall Drive fell on the house Tuesday afternoon. -- Sarah Stultz/Albert Lea Tribune

A power wire appeared to be sagging but was not disconnected. Alliant Energy was called.

The house belongs to Beatrice Olson and her son, Douglas W. Olson.

Olson said she was inside the house Tuesday afternoon when she heard a noise and then saw that the tree had fallen. A photo is on Page 3.

Tools were reported taken from a garage at 1115 James Ave. on Tuesday afternoon, according to Albert Lea police.