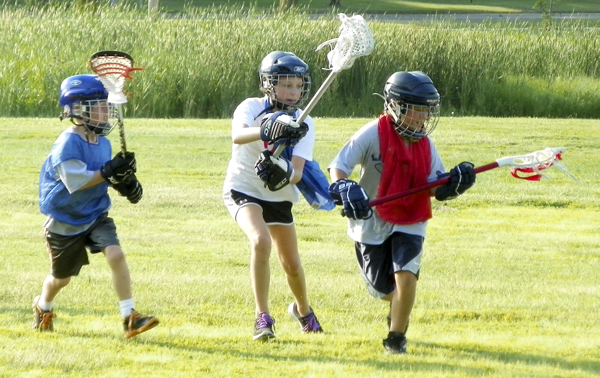 Even with the high temperature and humidity they continued running and participating in the drills and scrimmages led by Ed Pomerson.

The Albert Lea Parks and Recreation summer youth lacrosse program began nearly seven years ago and interest in it continues to grow.

When Pomerson first put together a summer youth lacrosse program it was held in the Albert Lea City Arena on artificial turf. After the turf was removed, he began instructing youth outside.

This year there are 24 registered youth in lacrosse. It is an open lacrosse league for all age groups and genders to help introduce the game of lacrosse to the Albert Lea area. Practice began May 14 and is from 5:30 to 7:30 p.m. Monday and Wednesday evenings every week.

Pomerson plans to keep teaching lacrosse until school starts in the fall. The youth will be playing two demonstration games this fall during half time for varsity soccer games.

About half of the registered youth lacrosse players are also hockey players and bring their own helmets and gloves.

“It is a good crossover sport,” Pomerson said. “It has the same concepts as hockey.”

Madisyn Anderson, 11, is playing lacrosse this summer for the first time and enjoys it.

“My mom signed me up because I want to play hockey and I have never played any physical sports before,” Anderson said.

Pomerson, who coaches girls hockey, said hitting in lacrosse isn’t like hockey. Only shoulder to shoulder and chest to chest hits are allowed in lacrosse. In lacrosse when one has control of the ball they have their head up compared to hockey players having to look at the puck on the ice.

To have fun and learn the basics are the two most important aspects of the youth summer lacrosse program, Pomerson said.

Youth interested in playing lacrosse can still register online at www.cityofalbertlea.org or by calling Albert Lea Parks and Recreation at 377-4370.