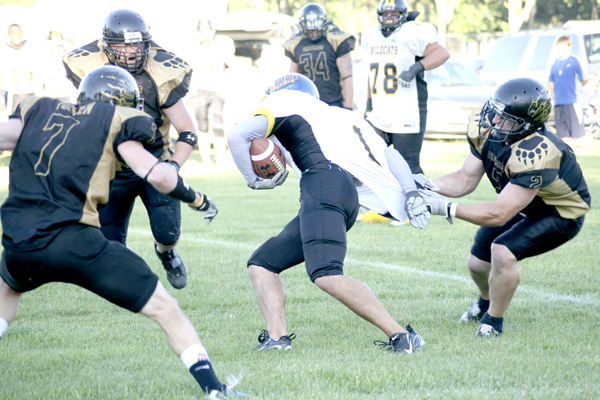 Trevor Haugh grabs on to the jersey of a Buffalo Ridge player on Saturday in Lake Benton. -- Melissa Schmidt/For the Albert Lea Tribune

The Grizzlies came up a few yards short on Saturday losing to the Buffalo Ridge Wildcats by a score of 24-27 at Lake Benton.

The Grizzlies came out swinging and scored a touchdown on their opening possession with a pass from quarterback Paul Ciochetto to tight end Tony Tolbers. Justin Wolf kicked the extra point, and the Grizzlies took an early lead, 7-0.

They moved the ball down the field effectively using the same formula that’s worked well in the past few weeks: run the ball on offense and wear out the other team.

In the second quarter the Wildcats drove deep into Grizzlies’ territory.

They elected to attempt a long field goal, but Anthony Ingram blew through the Wildcats’ offensive line and blocked the kick. At the end of the first quarter the Grizzlies still led 7-0.

On their next possession the Wildcats answered when running back Noah Sanderson scored a touchdown on a running play from the two-yard line. The extra point attempt was good, and the score was tied at 7-7.

The Grizzlies’ first play on the next drive was a 40-yard bomb by Ciochetto, hauled in by Jason Kuipers. Ciochetran the same play again, this time to Levi Fossen, in the end zone from about the 40-yard line.

Wolf’s extra point was good and the Grizzlies regained the lead 14-7.

Both defenses started to stiffen. The next three possessions ended in punts. On the Grizzlies’ next possession, they started deep in their own territory. Ciochetto threw a pass over the middle intended for Kuipers, but the Wildcats’ Jeff Thorson intercepted the ball and returned it for a touchdown. The extra point attempt was successful and the score was once again tied, 14-14.

The Grizzlies were forced to punt on their next possession, and the Wildcats gained momentum as they started driving down the field toward the end of the second quarter. Wildcats’ quarterback Jared Beck tried to thread a pass into double coverage, but Kuipers intercepted the pass inside the five-yard line. The halftime score remained 14-14.

The Wildcats got the ball first in the second half, but Grizzlies’ linebacker Trevor Haugh, ended it with an interception followed by a 20-yard return.

The Grizzlies came out and started to move the ball effectively. At midfield they decided to take a shot at the long bomb that had worked well earlier in the game, but Ciochetto’s pass intended for Kuipers was intercepted by Wildcats defensive back Drew Bunkers. The Grizzlies’ defense forced the Wildcats to punt once again, and with a short field ahead of them the Grizzlies went back to pounding the ball with the run attack of the Salinas brothers. The Grizzlies moved down the field, and finished the drive with a one-yard touchdown run on dive play to fullback Mikey Salinas. At the end of the third quarter the Grizzlies held a 21-14 lead.

The Grizzlies ate up the clock and drove into the red zone as they took the lead with a 20-yard field goal by Wolf.

The scoreboard read 24-21 with just over five minutes remaining in the fourth quarter. The Wildcats opened up their spread offense with five wide receivers and were able to move down the field with a series of quick short passes. Beck dived into the endzone from 10-yards out to give the Wildcats their first lead of the game. The extra point sailed wide left, and the scoreboard read 24-27 with just over two minutes left on the clock. After a couple of dropped passes, the Grizzlies found themselves facing fourth-and-one from the 12-yard line.

They elected to go for the win instead of the tie. The pass on fourth down was incomplete, and the Grizzlies turned the ball over with 23 seconds remaining on the clock.

The Wildcats secured the win by taking a knee, and the Grizzlies faced a 27-24 loss.

“I am very pleased with the way the team played ball today,” Grizzlies coach Stephen Piper said. “I couldn’t have asked for more. Does this loss make the playoffs potentially tougher? Yes. Can this team overcome those difficulties? I absolutely believe that they can.”

Elsewhere in the SPFL playoffs the North Iowa Bucks will most likely face the Minnesota Silverbacks. The South Central Hawgs have secured the No. 1 seed and will have a first round bye and home field advantage throughout the playoffs. For more information on the league standings and matchups as the playoffs progress visit www.myspfl.com.

The Grizzlies have a bye this week and will return to action on June 30 for round one of the playoffs.

Kickoff is scheduled for 6 p.m. at Southwest Middle School. There is no charge for admission at Grizzlies’ home games.