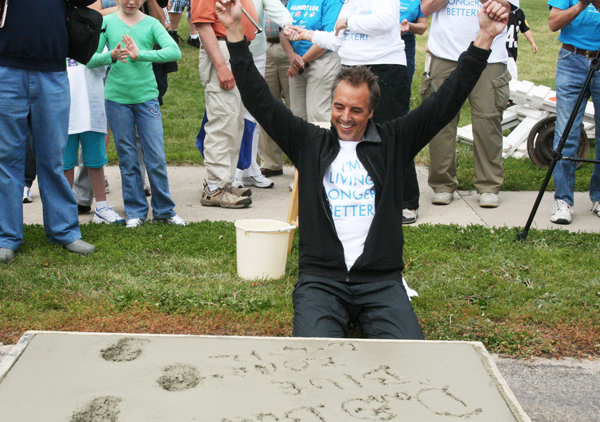 Blue Zones founder Dan Buettner cheers as he looks down at his signature in a square of cement Saturday. The square will become part of the sidewalk when the downtown is reconstructed. -- Sarah Stultz/Albert Lea Tribune

Invited to town for the dedication of the Blue Zones Walkway — the five-mile paved path around Fountain Lake — Buettner talked of Albert Lea’s success since 2009, when he first came to the city as part of the AARP/Blue Zones Vitality Project. The project aimed to make simple environmental changes to help people live longer, healthier lives. 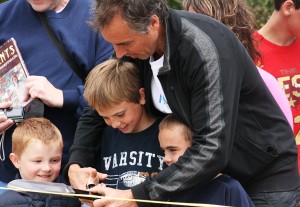 He said people naturally seek out unhealthy options when they’re faced with those choices, but Albert Lea leaders are “making active options the easy option.”

“I really believe you’re leading the way for the rest of the country,” he said.

Buettner, a National Geographic explorer, traveled to different areas across the world where people are living longest. He researched what common characteristics the people in each area had in common and wrote a book based off of what he found. He brought those characteristics to Albert Lea in 2009 as part of the Vitality Project to see if he could implement those healthier choices into everyday living.

Now cities in California and Iowa are seeking to do the same thing and many communities will be looking to Albert Lea for guidance, he said.

After Buettner’s comments, city leaders invited him to walk across and then sign a square of wet cement that will be placed downtown when the streets are reconstructed as part of the streetscape project.

He, along with other vitality leaders and children from the community, then cut a yellow ribbon on the Blue Zones Walkway in front of Fountain Lake Park. 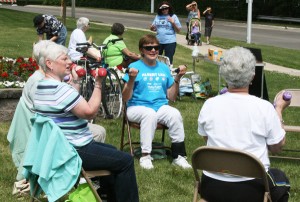 Women take part in a Bone Builders session Saturday as part of the Open Streets event off of Fountain Street.

The dedication, as part of Open Streets Albert Lea, aimed to bring people together for an afternoon to mingle in a car-free environment. It encouraged residents, including people who are not regularly active, to experience their community in a new way — by foot or some other form of nonmotorized transportation.

Though at first it was difficult for people to grasp the concept — many people still stuck to the sidewalks — there were people who took advantage of the time and brought their whole families out on bikes and scooters and rode them in the street.

But the event did not end on Bridge Avenue and Fountain Street.

People were invited to check out the National Vitality Center on Broadway Avenue, which will soon open with Prairie Wind Coffee in the front half of the building.

Around Fountain Lake, people could take part in events such as yoga, disc golf, canoeing and kayaking, to name a few — and all for free.

The event also included the kickoff of the 2012 “walking moai” program — now called Moais in Motion.

For the program, people will join with a group and take part in some form of physical activity.

Organizer Erin Sauer said instead of counting steps taken, however, people this year will count minutes spent together as a group exercising.

The program is open to any kind of physical activity, including walking, biking or even dancing.

In addition to the physical activity, teams can also participate in Vitality Adventures, which encourages people to visit the city’s parks to find hidden medallions.

Clues will be sent out via email, and once teams find the medallions, they should take pictures of their team members with them. At the end of the summer, the most original photo will win a prize.

“It’s a fun way to get to know our local parks,” Sauer said.

If people have questions, they can call Albert Lea Parks and Recreation at 377-4370.