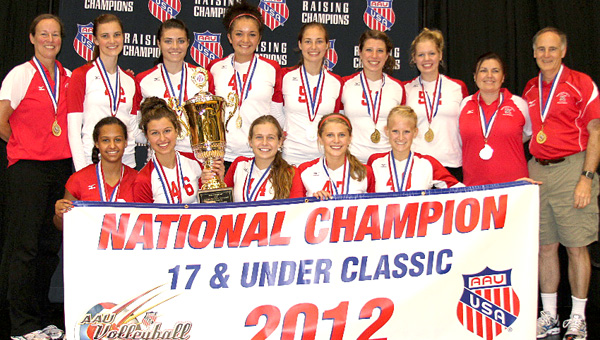 They call her “The Celebrator” due to excessive jumping, fist pumping and pounding on the floor after her team wins volleyball matches. And on Wednesday she had a lot to celebrate.

Sixteen-year-old Annie Ladwig plays on the Mizumo Northern Lights 17-White volleyball team out of Burnsville and last week the team was in Orlando, Fla., playing in the national championship tournament.

The team went undefeated 12-0 to win the title of National Champion in the 17 and Under Classic.

“Let’s just say it was an unbelievable way to end their season,” Ladwig’s mom, Jodi, said. “They won this whole tournament because they truly are a team. These memories are more important than the game itself.”

The win by the Mizumo Fives team was an upset and the players, coaches and parents are still in disbelief.

“I’m still trying to wrap my head around everything that’s happened,” Joanna Lyons, the team’s head coach, said. “This team has had a rough road getting to where we are. We’ve had some really great moments and some really not great moments so it’s been amazing to watch this group of girls come together and execute.”

Lyons said the bond the girls have is what pushed them to their title.

“They truly go on the court and play for each other before they play for themselves,” Lyons said. “They’re great athletes and when you add team chemistry to that, that can take you anywhere.”

Ladwig, an outside hitter and captain on the team, had the winning kill in the third set of the semi finals that sent the team to the championship game with a 15-13 win. 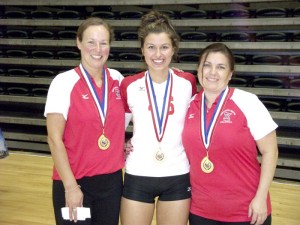 Ladwig said the team made an 11-step poster that detailed 11 things the team needed to work on to get to the championship.

After three weeks and 11 games, the poster had done the trick.

The team was named national champions.

“For every one team that gets the national championship, there’s many that don’t,” Lyons said. “These girls should be very proud of themselves.”

The team’s picture will forever hang in the Northern Lights warehouse in Burnsville for many more athletes to see.

Jodi and Ladwig gave a lot of credit to the team’s coaches Lyons and Sara Holcombe.

“I think these two coaches have brought out the best in them. This group of girls were so special to them like another daughter, or another 11 daughters,” Jodi said.

In addition to the team win, Ladwig was named All-American, a title given to the top players of the tournament.

“It’s crazy,” Ladwig said. “I remember looking at all the pictures of the other girls that got All-American, and I wanted to put it on my bucket list, but the chance was one in a lifetime. I always wanted to be one of those girls.”

Jodi said Ladwig being named All-American was the frosting on the cake.

“She played out of her mind,” Jodi said. “She brought everything she had to this tournament.”