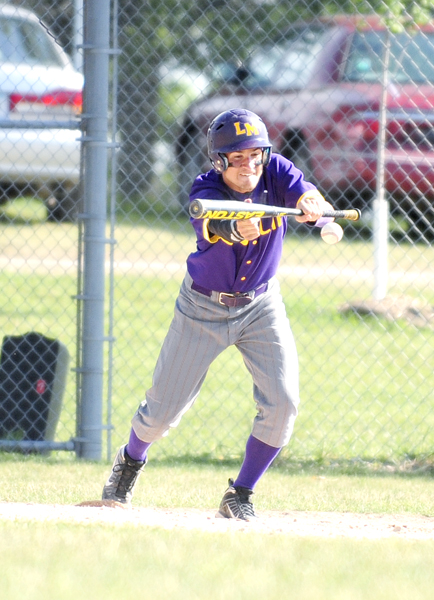 Bulldogs Josh Peters bunts the ball in the bottom of the eighth inning on Tuesday against Garner-Hayfield/Ventura. -- Brandi Hagen/Albert Lea Tribune

LAKE MILLS, Iowa — “It’s a great thing to have a bunch of believers on your team that believe no matter how many they’re down by they’re never out of the game,” Lake Mills baseball coach Jason Blaser said.

The Bulldogs trailed Garner-Hayfield/Ventura 11-6 going into the bottom of the seventh inning of Tuesday’s make-up game in Lake Mills.

Instead of throwing the game, the Bulldogs came back to win 12-11 in the eighth inning.

Peter Hagenson led off the top of the seventh for the Bulldogs with a hit to right-center.

The batters behind him followed suit. Andy Dahle and Paul Scholbrock both reached base to load the bases.

Josh Peters smacked a ball into left field that sent both Hagenson and Dahle home.

“Just getting that first guy on gives everybody behind him a little more confidence,” Blaser said.

Just after the Bulldogs scored two more runs, they were thrown out twice.

With one out to go and the bases still loaded, Taylor Throne hit the ball into right field to send Scholbrock to home to tie the game 11-11.

The Cardinals decided it was time for a relief pitcher, and the last batter for the Bulldogs was struck out.

A usually pretty noisy team, the Bulldogs dugout was quiet through most of the game. All of that changed as they saw a chance to make a comeback.

“Energy is contagious,” Blaser said. “About the fifth inning a couple guys stepped up and got everyone to stand at the fence. You get one or two people that are energetic, then five or six, then pretty soon the whole team is standing.”

The game was forced into an extra inning, and Bulldogs pitcher Luke Kayser caught a pop fly for the first out and the next two hits were caught in the outfield.

Once again, the first two guys up to bat reached base for the Bulldogs giving them another boost in confidence.

Peters, the third batter up, bunted and was thrown out at first, and Lincoln Boehmer was walked to first to load the bases for the final time.

A hit by Matt Throne pushed Dahle home for the Bulldogs winning run.

“It’s great for the kids,” Blaser said. “It’s just a testament to their never-out-of-it attitude.”