Beyond the Flames: A versatile craft 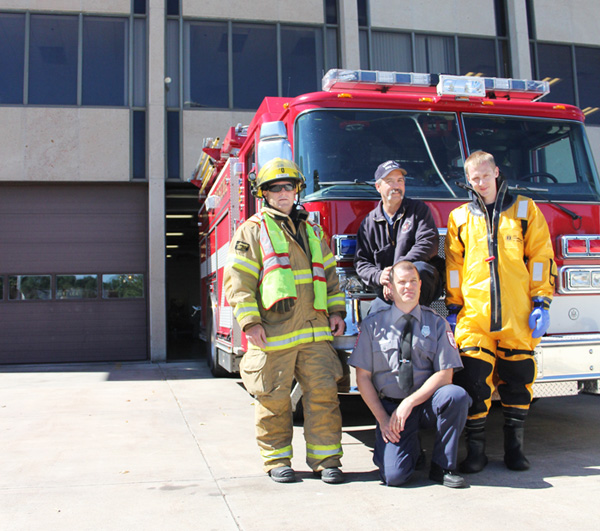 Editor’s note: This is the first in a six-part series looking at the duties of the Albert Lea Fire Department.

Working hand in hand with the 15 other men currently on the force, he has battled blazes, investigated fires and spoken to children about fire prevention.

“It’s good to be able to help your community, help your neighbors and hopefully make a difference in someone’s life,” DeVries said.

Each day, however, amid the fire calls, physical training and record keeping, DeVries and the other firefighters can be found fulfilling additional duties. 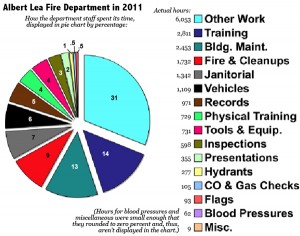 According to a report released this month by Florida-based consultant firm Almont Associates, Albert Lea firefighters spend only about 9 percent of their time each year fighting and cleaning up fires. They spend about 19 percent in some form of training.

That means more than half of their time is filled in other responsibilities.

The figures come into play as city officials are examining the responsibilities of firefighters and as they are looking at whether there should be changes in staffing in the department.

City leaders are also examining at what should be done with the existing fire department and who should lead the force. The evaluation comes as the city is dealing with tight budget times with the loss of state funding and other revenue.

The city hired Almont Associates for almost $30,000 to get an outside viewpoint.

According to the report, a majority of the firefighters’ time is spent doing things such as responding to critical car crashes, maintaining vehicles and equipment, cleaning City Hall, checking carbon monoxide and smoke detectors, inspecting rental houses and industries, giving presentations in the community and maintaining hydrants, among others.

Police Chief Dwaine Winkels, who serves as the interim fire chief, said when furniture needs to be moved in City Hall, if the large windows on the building need to be cleaned or if something as simple as a light bulb needs to be changed, the firefighters are most often the people to provide the labor.

“They’re actually the handymen for the city,” Winkels said. “They take any odd job that people don’t know what to do with, and they pick it up if they have the time.”

They also operate smaller-scale programs such as a call-in program for elderly people who live alone and a program to help people test their blood pressure.

Though he recognizes the tough economic condition the city is in, Winkels said city officials will have to consider what would happen to those responsibilities if the department’s staffing is reduced.

“As you lose staff, that is a 2,080-hours-a-year position,” he said. “You lose 2,080 hours of work that either somebody else has to pick up or it goes away. It still comes down to what direction is the city of Albert Lea going to take their department.”

Winkels said the department is made up of committed employees who have been in “constant flux” for the last 10 years.

“We have a really good fire department,” he said. “These guys are dedicated to the city and the department, and they deserve a future. They deserve to know this is what we’re going to be from here on. This is long overdue.”

The Albert Lea Fire Department has 16 budgeted full-time positions, including one chief, four captains and 11 firefighters.

The chief’s position is being held for now by Winkels, and two firefighter positions are filled with temporary employees.

The department is also assisted by the Albert Lea Township Fire Department, which includes a paid, on-call staff of 16 budgeted volunteers. The two departments share an administrative assistant.

Despite have numerous responsibilities, the report indicated the firefighters could increase their productivity, noting they were productive about 67 percent of their available time.

In 2011, firefighters spent about 13 percent of their time on building maintenance, 7 percent cleaning the building, 6 percent working on the fire trucks and another 31 percent on a category called “other work,” according to the report.

Winkels said this would include programs such as the reassurance call-in program, responding to critical car crashes and even prevention efforts.

Almont Associates has recommended three staffing options for the city to consider implementing — some of which include reductions.

The three staffing options also assume the city will choose to have a full-time chief.

• Option 1: This calls for maintaining the current number of personnel, but redefining some of the positions. It also calls for increased productivity in the workforce by 33 percent.

Option 1 would increase the budget to an estimated $1.7 million annually. The additional expenses would cover benefits for the two temporary firefighters and to cover equipment maintenance and other services that have been underfunded or eliminated.

• Option 2: This calls for reducing the workforce by three full-time firefighter positions, with little to no increase in productivity.

This option was estimated to bring the annual budget down to about $1.32 million. The firm listed disadvantages such as less control of property loss, limited ability to offer services outside of the community and a reduction in the city’s ISO rating from a 3 to a 4, among others.

According to the report, insurance increases would be minimal in commercial property insurance rates and there would be no impact on residential customers.

• Option 3: This calls for reducing the workforce by one captain and six firefighters. This would bring a loss in productivity.

The annual budget with this option would end up at $1.22 million.

According to the report, the disadvantages of this option include an increase in property loss and similar ISO reduction, among others.

Adams said from his viewpoint, he’s narrowing in on Options 1 and 2, though Option 3 is not officially off the table.

The estimated costs would vary if the city chooses to have a public safety director. This position would be over both the fire and police departments.

Adams said he hopes to have a decision made about the leadership of the department in the next three to four weeks and said he’s hoping the City Council can decide the organizational structure within the next two to three months.

He hopes the decision can be made as the city is setting its preliminary 2013 budget levy in September.

Before the decisions are made, he hopes to release to the public how much each option might cost for the average taxpayer.

“Is it going to be an additional $10 a month or $5 a month? We’re trying to quantify that so there’s some kind of public awareness,” Adams said.

Albert Lea Fire Department history
1870: A group of 30 volunteers came together to form the Albert Lea Bucket Brigade.
1879: The Albert Lea Fire Department was organized. The first station was at the corner of Main Street and Washington Avenue. Firefighters used a steam engine water pump and two hose carts that were pulled by horses until 1891 when the city’s water system was completed.
1903: A new City Hall was built on North Broadway Avenue, in the space most recently occupied by O’Byrne Century 21 Realty.
1918: Firefighters used their first motor-driven water pump truck.
1948: The department went to a fully paid organization, staffing seven firefighters per shift.
1968: The department moved to its current location at 221 E. Clark St.
1991: The city contracted with the Albert Lea Township to become a combination department. At that time the city went from funding seven firefighters per shift to five per shift. This includes one captain and four firefighters.
January 2012: The city contracted with consultant firm Almont Associates to review the structure of the Fire Department.
June 2012: Almont Associates President Tom Weber released a report on the department.
Summer to winter 2012: City officials are expected to make a decision about the leadership and structure of the department.