Beyond the Flames: City Hall caretakers 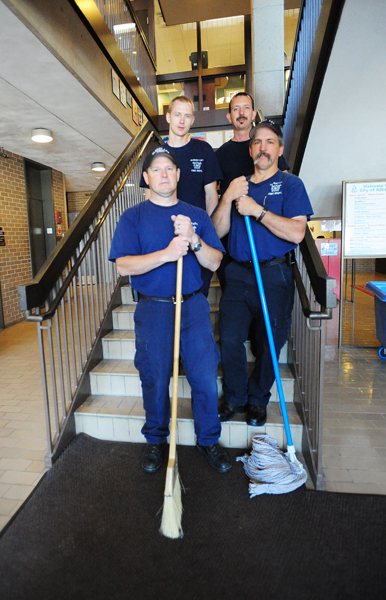 Editor’s note: This is the fourth in a six-part series looking at the duties of the Albert Lea Fire Department.

Just after 7 p.m. most days of the week, as other activity in City Hall is coming to a close, the Albert Lea firefighters are gearing up to complete another one of their responsibilities.

With brooms, mops and other supplies on hand, the firefighters jump out of their traditional roles to become the janitors for the city.

Albert Lea Fire Capt. Scott Hanna said the firefighters vacuum and mop the floors, clean the bathrooms and empty the trash and recycling. Twice a year they wax the floors and wash the exterior of the large windows on the building. 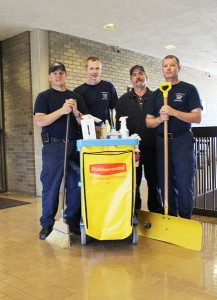 According to a new report released this month by consultant firm Almont Associates, the Albert Lea firefighters spent 7 percent of their overall time in 2011 doing janitorial work. On top of that, they spent 13 percent of their time on building maintenance.

Some city officials are questioning whether this is the best use of the firefighters’ time.

Hanna said this will be the third year firefighters have been cleaning City Hall.

But those responsibilities have continued beyond a year. Hanna said negative feelings on cleaning began after the agreement extended beyond that first year.

“They looked at this as a choice of losing some of our newer firefighters and serving the community versus cleaning,” he said.

The firefighters, to some extent, have always been involved with building maintenance. Firefighters have also always been responsible for cleaning the fire station itself, which is in the east wing of City Hall.

Fire Capt. Mark Roche is responsible for maintenance of the mechanical systems.

“Anything that has to do with the building that needs to be done, we’re probably doing it,” Hanna said.

The firefighters also perform maintenance on the hydrants around the city. They flush them in the spring and fall. In the summer, they paint them and pull weeds; in the winter, they shovel the hydrants out from the snow.

Along with the police, firefighters also check the emergency sirens throughout the city.

Albert Lea City Manager Chad Adams said a decision will be made within the next one or two months about who will clean City Hall as staff and the City Council work on the 2013 budget.

Adams said staff are looking at a variety of options, including whether to contract out for the janitorial services while still having the firefighters continuing with some of the building maintenance.

“It’s highly likely the cleaning services currently being provided by the fire personnel will end at some point,” he said. “It may happen yet this year.”