Beyond the Flames: Giving hearts 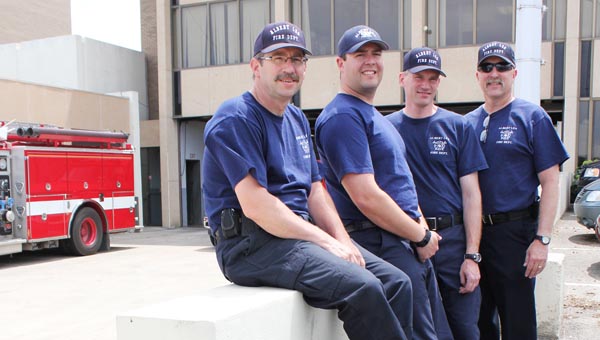 Editor’s note: This is the second in a six-part series looking at the duties of the Albert Lea Fire Department.

Standing in freezing temperatures both in and around a hole in ice-covered Fountain Lake, Albert Lea firefighters are ready to take action.

Dressed in their water rescue suits or turnout gear, the firefighters watch as person after person jumps off the landing into the icy water below.

That’s the scene of the Polar Plunge, a major draw for The Big Freeze, an annual winter festival that falls on Presidents Day weekend in February.

The firefighters, many off-duty, have devoted their time and training in water and ice rescue to plan and staff the plunge — all out of a desire to help the community, Hanna said.

Though volunteering in the community is not a requirement of their job, many of the firefighters use the skills they have learned to better the city.

“From the very beginning they were on board to help us,” said Susie Petersen, executive director of the Albert Lea Convention and Visitors Bureau. The CVB has spearheaded The Big Freeze, which raises funds and food for local food shelves. “It’s a good cause. They believe in the community, and it’s a fun thing to do.”

“It’s commitment to the community,” Schallock said of why the firefighters volunteer. “Whether it be on-duty or off-duty, we’re always looking to help out wherever we can.”

Schallock heads up annual fundraising efforts through the Muscular Dystrophy Association for the “Fill the Boot” campaign.

Last year, stationed at the intersection of Main Street and Broadway Avenue, Schallock and the other firefighters — many of whom were not on duty — were dressed in full gear while they carried their boots and asked for donations.

In previous years, firefighters collected money for the fight against muscular dystrophy during the Third of July Parade and at the Northbridge Mall.

“It’s tradition,” Schallock said, when asked why he and the department participate.

The firefighters also can be found volunteering at aid stations in the April Sorensen Memorial Half Marathon, raising money for the Albert Lea Salvation Army during the Christmas season and hosting an open house at the fire station to spread a message of fire prevention.

“There are a lot of firefighters involved,” Hanna said. “But the firefighters aren’t asking for attention. They’re doing it because it’s the right thing.”

Another way several firefighters volunteer is as part of the Freeborn County Fire Investigation Team.

The team is made up of trained fire investigators who assist outlying departments in the county with investigating fires.

“It’s another tool for the outlying departments to use to better get their fires looked at,” said Capt. Lee DeVries.

“Some of us investigators for the city wanted to get more experience. We recognized the need out in the county where fires just hadn’t been getting investigated with some of these other departments not having the resources.”

DeVries said being on the team gives investigators the chance to use the skills they have learned to better others.

The team, which has been in place since 2005, has about a half dozen Albert Lea firefighters.

“It’s very rewarding to have a job where your job is to help people,” Hanna added.

Read the first part in the series.