Beyond the Flames: ‘My angels’ 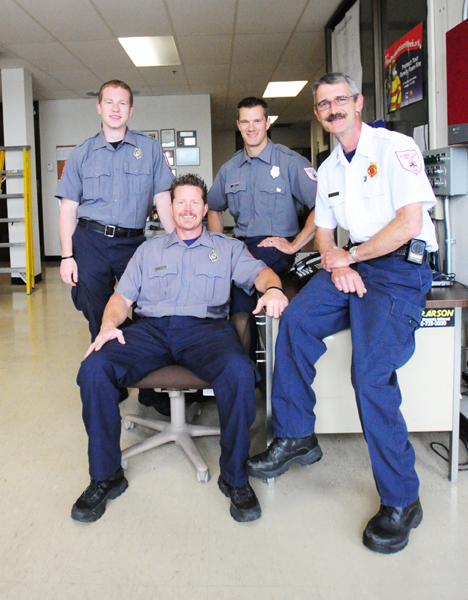 Editor’s note: This is the third in a six-part series looking at the duties of the Albert Lea Fire Department.

An elderly woman who lives alone, Kycek is one of about 40 participants in the department’s reassurance call-in program.

“I call them my sweethearts, my angels,” Kycek said. “They watch over me.”

The reassurance program is one of several lesser-known — but life-saving — community programs the firefighters are in charge of each day between their other duties.

The firefighters also perform tasks such as giving free blood pressure tests each week at the Senior Center, checking carbon monoxide and smoke alarms, visiting the local schools and providing other training for employees and businesses in the city.

The responsibilities were briefly discussed in the report released earlier this month by consultant firm Almont Associates of Florida. The firm was asked to examine the duties of the department and make recommendations about staffing.

Albert Lea Fire Capt. Mark Light, who has worked for the department for about 15 years, said the community programs have become a part of a daily routine.

He estimated the reassurance program started at least 30 years ago. The program began after a woman who lived alone did not come to church one day, and people found out that she had died in her home.

Light said the people who take part in the program are often older people who do not have family in the area. It enables them to have contact with someone on a daily basis.

While they call in the morning to report they are OK, they also call at other times if they have other problems. Light noted one person recently called asking what to do with an air conditioner that wasn’t working.

“It’s nice that they think of us that way, that we’re able to do this for them,” he said.

Albert Lean Sally Lindsey said she got started with the program shortly after her husband died 12 years ago.

“Somebody just told me about it, and I’ve been on it since then,” Lindsey said.

She noted the service has given her a feeling of safety.

“I knew that they would come if I didn’t call them,” she said. “I don’t have family in the area, so it’s especially important.”

Every Thursday morning for an hour at the Senior Center, the firefighters conduct blood pressure testings.

A service mainly for the senior population, the checks have been conducted for at least 30 years, Light estimated.

According to records, the department conducted 445 blood pressure readings in 2011.

“Proactive preventative service is essential to the success of any fire department,” the report states. “This type of program is paramount to keeping the community healthy.”

The Southeastern Minnesota Association of Realtors helped the department develop a program to give combination smoke and carbon monoxide detectors to people who cannot afford them.

The Realtors give an average of $1,500 each year to purchase the detectors. An average of 75 to 100 are given out each year, Light estimated.

Though anyone can participate, Light said the program is an outreach to many of the disadvantaged families in the community.

“This has great life-saving potential,” the report states.

If people already have smoke or carbon monoxide alarms, the firefighters are willing to come out and check the batteries on them, Light said.

The report states one of the most successful parts of the Albert Lea Fire Department is the firefighters’ efforts to educate the public about fire prevention.

Starting with preschool-age children, the firefighters try to teach the basics of fire safety.

They also visit children in kindergarten, and then in first grade they offer a T-shirt program where children can take home a worksheet about basic fire safety and review it with their families. At the end of the week, if they bring back the worksheet signed, they get a T-shirt.

This has been going on for 20 years.

“If you’re going to change anything, you have to start with the kids,” Light said. “They really are receptive at that age. If you can start with them then and plant some of those seeds.”

Firefighters visit students again in the fifth grade, going into the schools to talk about a poster contest during national Fire Prevention Week.

The report states firefighters reach about 250 students a year with a visit by the fire truck.

Light said another important part of fire safety is making sure people are familiar with how to use fire extinguishers.

He estimated about 20 to 35 times a year the firefighters get called out to businesses in town that ask for training for their employees about using fire extinguishers.

“A lot of people have never used these, so it takes the fear away and helps them be more comfortable with the equipment,” Light said.

This week they have training set up at Minnesota Corrugated Box.

Trained firefighters also give CPR classes to all city employees. Rather than hire someone else to come in and teach, Light said having firefighters teach has been one way the city has been able to save money.

Many other businesses and organizations call on the Fire Department to perform additional tasks as needed.

Light said organizations such as the Red Cross have asked for help unloading trucks for blood mobiles. The American Legion has asked for help each year during its flag-burning ceremony on Flag Day.

“There’s a lot of phone calls over the course of the year,” he said.