Beyond the Flames: Saving lives 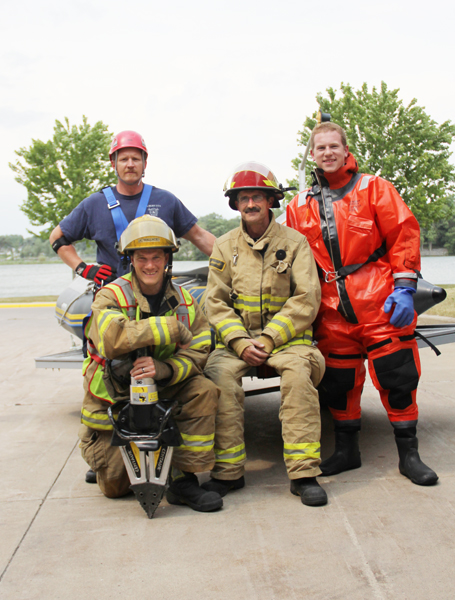 Albert Lean Delcie Brandt has come a long way in the last 1 1/2 months.

Struck by a semi on May 8 at the intersection of Minnesota Highway 13 and West Main Street, Brandt said she is grateful to be alive and grateful to be getting better each day.

“It certainly could have been worse,” she said.

Brandt, 69, said if it weren’t for the quick response of the first responders that day — including the Albert Lea firefighters who extricated her from her Volkswagen Beetle — she may not be where she is today.

“They sure did a great job because I’m home,” she said. “I can walk and talk and see and use my arms.”

An average of one time a month, the Albert Lea Fire Department is called out to assist at what is deemed as a critical crash.

Trained in how to use the Jaws of Life, the firefighters are one of about five groups throughout Freeborn County who have extrication equipment that at times becomes so crucial to saving a life.

Albert Lea Fire Capt. Mark Light said the department is also called out on any known or unknown injury crash within Albert Lea, and sometimes the firefighters are asked to assist on Interstate 90 and in Clarks Grove.

But rescuing people on land is not the only type of rescue the Albert Lea Fire Department is trained to perform.

Light said in the last two to three years, the Fire Department has been called out at least a half dozen times to rescue people who have either fallen through or gone through the ice of an area lake.

“Fortunately these have all been rescues, no recoveries,” he said.

In the last three years, the firefighters responded to calls of snowmobiles that crashed through the ice on Fountain Lake and calls of hunters who encountered problems on various lakes in the county.

He said in November 2009, they responded to a call of a boat that capsized on Pickerel Lake with three duck hunters inside.

The men had been returning to shore after duck hunting when their boat became overloaded, sunk and capsized. The three were not wearing life jackets.

The firefighters, along with a man who lived nearby, pulled the men to safety.

“It’s nice to be able to go out and do those kinds of things,” Light said. “And having the equipment we need and the abilities to do that.”

After climbing into cold water rescue suits — which are worn for any rescue where the water is under 70 degrees — the firefighters take turns wading around in the water before they are pulled out.

Light said the firefighters are also trained for confined space rescue, in the case someone is trapped or incapacitated in a small area.

Fire Capt. Scott Hanna said within the last year, the Fire Department has assisted authorities in helping find at least six people who have gone missing.

A certified tracker, he has taught some of his skills to the other firefighters, along with both the Albert Lea Police Department and the Freeborn County Sheriff’s Office.

He said he became interested in tracking after a child went missing several years ago in the county.

“We had several hundred people who showed up to help, but nobody knew what to do,” he said. “I found that very frustrating.”

He has since been certified in managing a lost-person incident.

In May, Albert Lea police called on Hanna and the Fire Department to look for 38-year-old Michael Thostenson, who had gone missing.

Hanna said firefighters tracked by foot for several hours in the middle of the night, and he went back the next morning to continue searching.

Hanna was able to eliminate some areas police thought Thostenson might have gone, and he gave them his opinion on where the man went.

Thostenson ultimately was found by a private search group near Goose Lake. He had died of a self-inflicted injury.

Hanna said he practices his tracking skills on almost a daily basis and has been asked to help look for missing children and for missing elderly people.

Light said almost half of the firefighters are trained emergency medical technicians, but everyone at minimum is a trained first responder.

A report released earlier this month by consultant firm Almont Associates, who studied the department, called for all firefighters to be trained to the EMT level.

In addition to responding to critical car crashes, the firefighters — when trained as EMTs — could respond to other critical emergencies as well.

The report stated the hospital has even considered stationing a reserve Mayo ambulance at the fire station to be staffed by the firefighters when all of the Mayo units are busy. Doing this would keep the fire trucks available for fire responses.

“This plan increases the productivity of the Fire Department and increases the efficiency of the Mayo Clinic Health System units,” the report states.

Read the rest of the series: