Albert Lea Police Chief Dwaine Winkels said there was no fire, but the fire alarms were set off. He was unsure whether there was any electrical damage.

A rock was reported thrown through a window at 1306 Levison St. at 4:22 p.m. Thursday. According to police, the damage reportedly took place Sunday night. Damage is estimated at $300. 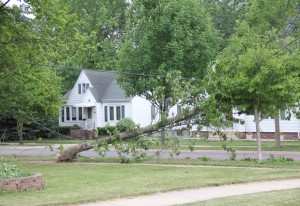 A part of a tree fell on a power line Thursday at 502 E. Fifth St. in Albert Lea. -- Danielle Boss/Albert Lea Tribune

Items were reported stolen from a gravesite at the Freeborn Cemetery, 28682 653rd Ave. in Freeborn, at 2:36 p.m. Thursday, according to the Freeborn County Sheriff’s Office.

Police stated other than the one homeowner where the tree fell, no one else was without power.