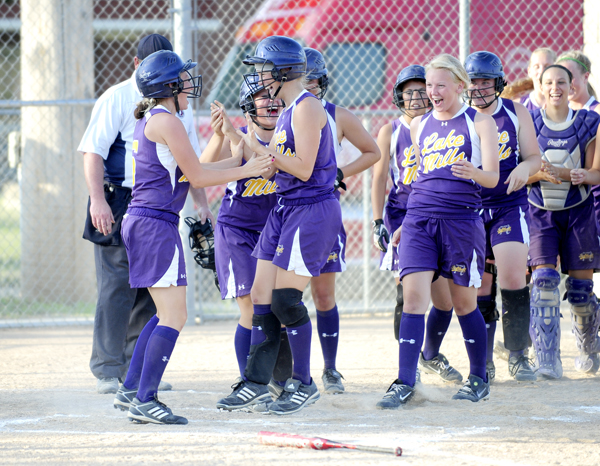 Lake Mills’ Carlie Christianson is surrounded by teammates as she returned home after hitting a grand slam on Tuesday. -- Brandi Hagen/Albert Lea Tribune 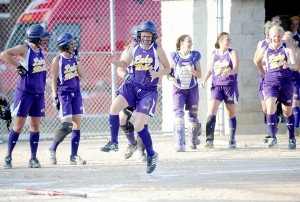 Jurnee Peña jumps in the air before crossing homeplate after Carlie Christianson hit her home on a grandslam.

The Bulldogs had jumped out to a 4-0 lead over Rockford on Tuesday at home, but the game had become scoreless until Christianson lit up in the bottom of the sixth.

The three batters before Christianson all reached base by bunting. With the bases loaded, Christianson smashed a ball to the outfield for a grand slam.

“I just got my batting back this season. I was kind of in a slump so I need to keep hitting well and getting on base,” Christianson said. “That’s a great way to start so hopefully I can add on to that.”

With an 8-0 lead, the Bulldogs scored two more runs to end the game in the sixth for a 10-0 game.

I feel like we did a good job,” Bulldogs coach Sabrina Roll said. “I told them to be aggressive off the batt and they did. We came out on top right away.

Roll said Christianson was due for a homerun because the girls in the batting order right after her have already scored theirs.

“It was perfect timing in the game, especially in the heat,” Roll said.

The Bulldogs had seven hits for the day, and Josie Brackey struck out 14 batters.