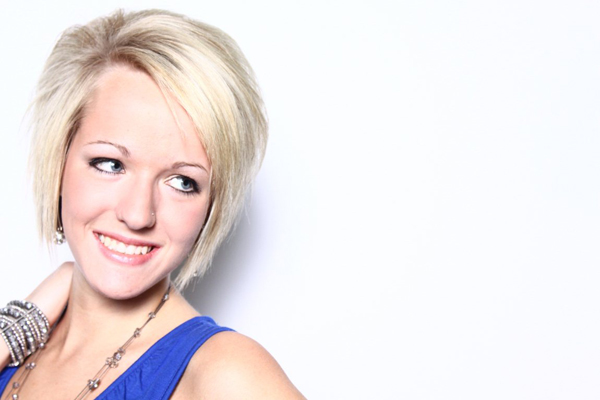 Amy Bohlen finished an audition with Audition America on Sunday in Mankato. It will be at least three weeks before Bohlen will find out how she did. -- Submitted

Last week she was going through her everyday routine when she received a phone call that led to a new experience.

Twenty-year-old Amy Bohlen received a phone call on June 14 asking if she would be interested in modeling for Audition America, a scouting organization who was looking for new talent in Mankato.

“I didn’t know what to think,” Bohlen said.

She said she remembered her sister Holly had said something about entering her in a modeling competition awhile back, but she was surprised to get the phone call.

After getting more details, Bohlen traveled to the River Hills Mall the next day for an interview.

“I was so nervous,” Bohlen said.

For the interview Bohlen had to memorize a script and walk down a catwalk set up in the mall.

“It kind of came natural,” Bohlen said. “I didn’t know it was in me. When I got up there I just walked the stage. It’s not something I really practiced.”

Bohlen was told she was the top scorer of all the auditions.

“It was a lot of mixed feelings, but after the photo shoot I really wanted to go back and do more,” Bohlen said.

The photo shoot took place on June 17. Bohlen went through two different shoots. An exclusive shoot where she had no makeup on, no jewelry and black clothing. In the other shoot she had makeup on and was able to wear colorful clothing.

“In the exclusive one you have to be serious,” Bohlen said. “I can’t be serious in all my pictures.”

The next step in the process was the talent portion. So on Tuesday, Bohlen went back to Mankato to practice for the talent show that would take place Sunday. For her talent, Bohlen practiced doing a Covergirl commercial.

Bohlen completed the final step of the process Sunday and now has to wait at least three weeks to find out the results.

“I think about the other girls and I wonder if they’ll do better than me, but I try to be as confident as I can,” Bohlen said. “If I don’t make it, I don’t make it. It’s going to be an adventure either way, an experience.”

Bohlen is a graduate of La’ James College of Cosmetology in Mason City, Iowa, and has been working at Classic Reflections Salon & Spa in Albert Lea for the last 10 months.

Bohlen said she went to Mason City for the cosmetology program because it requires more work hours than Minnesota. She said the higher number of hours would be required in most other states if she decides to move so she wanted to complete them right away.

Interesting fact: She is a fanatic for dresses.