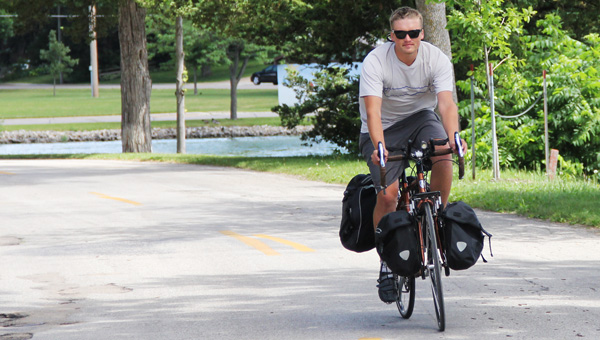 Teal Hunter rides his Trek 520 touring bicycle Thursday down Edgewater Drive, where he is staying with the Bergstrom family. --Kessa Albright/Albert Lea Tribune

A cyclist making a 3,000-mile trek for a charity stayed for four nights in Albert Lea this week.

Teal Hunter of Missoula, Mont., traveled 1,400 miles in 18 days. He started at his home June 1 and hopes to be done by the end of July when he reaches York Beach, Maine.

“You can go quite far on a bike if you want to,” Hunter said.

He arrived in Albert Lea on Tuesday, having made it from Fairmont. He headed east Saturday but his destination was unknown. A route map shows he will hit the trails near Lanesboro. 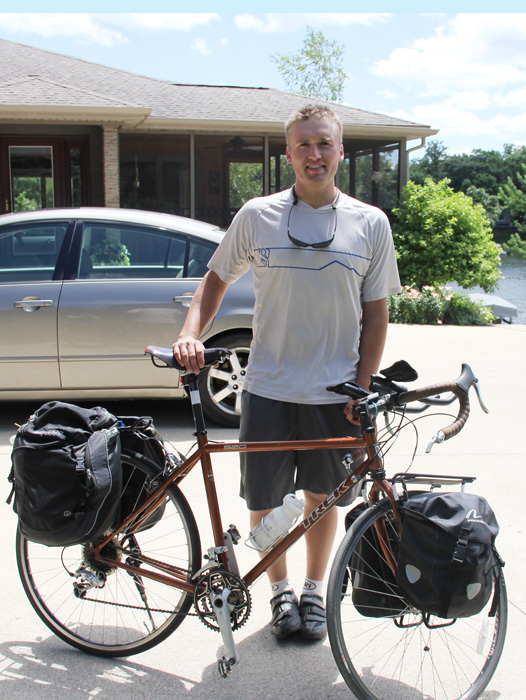 Teal Hunter stands with his Trek 520 touring bicycle outside the Bergstrom home where he is staying while he's in Albert Lea. "Well, this is home," Hunter said. --Kessa Albright/Albert Lea Tribune

Hunter stayed with the Bergstrom family while he was in Albert Lea. Denis and Lori Bergstrom own Jim & Dude’s Plumbing, Heating & Cooling. Hunter’s girlfriend, Kaci Bergstrom, was in town visiting her parents for the weekend. The family went on a bike ride together, boated on Fountain Lake and met Mayor Vern Rasmussen, a neighbor to the Bergstroms.

“I couldn’t do this without friends and family,” Hunter said.

Hunter is riding his Trek 520 touring bicycle in effort to raise money for the National Children’s Cancer Society. The charity helps families with children who have been diagnosed with cancer by raising money for their medical bills and other financial needs.

Tealwashere.com is a website set up to support Hunter and NCCS. Sponsors donate $50 or more to get a special thanks on the homepage of the website along with their company logo. On the website people can pledge a dollar amount for every mile Hunter travels.

There’s a map on the website to track exactly where Hunter is. Hunter updates the Tealwashere.com Facebook page daily with pictures and statuses on how he’s doing on the road. The page is filled with encouragements from friends, family and strangers supporting the cause.

“I’m out there by myself, but not really,” Hunter said.

Like most, Hunter learned how to ride a bike when he was 5 or 6 years old. Studying abroad during college in Japan he had to ride a bike to get around. Hunter found great enjoyment in the sport. His first long-distance bike tour was from Oregon to Montana when he was 23.

According to Hunter, there are many recent college graduates involved in bike touring. He stops at bike shops all around the country and meets people on the same kind of adventure he’s on.

“Anybody can do it,” Hunter said.

Hunter has run into some obstacles on his self-supported tour. He biked through a snowstorm in the mountains of South Dakota and had to be rescued. Half his trip has been biked up mountains and hills so he’s looking forward to riding the flat surfaces of the Midwest.

Hunter’s goal is to travel 100 miles a day, but says that most of the time he doesn’t reach his goal due to the climate or the type of surface in the area. Surprisingly Hunter has only gotten one flat tire on the trip.

Halfway done with the journey, Hunter stays positive. He is looking forward to the outcome of his trek and how much money he helps raise. He also can’t wait to taste the East Coast lobster once he gets to Maine.