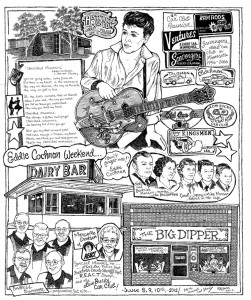 Following the event, the prints will be available at Adam’s Originals, 238 South Broadway.

The print tells the story of Eddie Cochran and the history of Albert Lea.

Top left shows the Historical Museum with the projected addition.

Top middle shows handsome Eddie with his Gretsch guitar and the lyrics to the song recorded by Eddie, “Cherished Memories,” lyrics by Sharon Shelley, Eddie’s fiance.

Also shown are the logos to the eight cars clubs once active in Albert Lea. This year is the fourth car club reunion. The “Scavengers” is the oldest car club in Minnesota. Car club members from as far away as California are coming.

Lower left shows the Dairy Bar owned by Alby Jensen. The Dairy Bar was famous for its wonderful chocolate ice cream. The address of the Dairy Bar was 609 Babcock; about where McDonald’s now is. Also shown is “The Big Dipper,” its address was 927 S. Broadway Ave. Shown are the owners Nels and Beatrice Monson and their children: Carol, Jerry and Mike. Carol and Jerry helped in the cafe. Bea’s home made donuts and the Sunday night special, “5 burgers for $1.00” were appreciated by the Big Dipper patrons.

Bottom left is a depiction of the band, Endless Summer, who will be performing Saturday night in the grandstand.