Funeral services for Elmer Carl Schneider, 92, of Albert Lea will be at 11 a.m. Thursday at Concordia Pickerel Lake Lutheran Church. The Rev. Wendy Anderson will officiate. Burial will be at Pickerel Lake Cemetery. Visitation will be from 5 to 7 p.m. Wednesday at Bayview/Freeborn Funeral Home and one hour prior to the services at the church. To sign the guestbook go to www.bayviewfuneral.com. 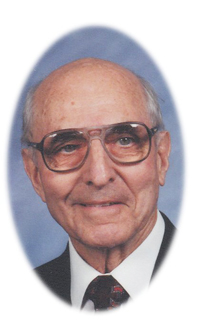 Elmer Carl Schneider was born on Dec. 28, 1919, the son of Albert and Anna (Schmidt) Schneider on the family farm built by his great-grandfather in 1881. He was baptized and confirmed at the Pickerel Lake Lutheran Church. Elmer attended District 124 School and graduated from Albert Lea High School in 1937. He worked with his parents on the family farm until 1948 when he and his family moved to Albert Lea because of health reasons. It was a very difficult time in Elmer’s life having loved the farm so much. Elmer never served in the armed services, being deferred for agricultural production, but was given an honorary certificate from the State of Minnesota for his efforts in funding of the troops. Elmer remained active with the operation and management of the farm until 1997 when he sold the farm which had been a four-generation operation. Elmer’s greatest joy was in serving his Lord by bringing the good news of salvation to lost souls throughout the world. His home church was especially dear to him. He was involved in the building of the new church in 1950 and helped select the stained glass windows. He taught Sunday School, served as a deacon and was president of the Church Council. Elmer was humbled and honored by many families who appointed him as power of attorney and executor of estates. Elmer did much volunteer work for the senior citizens, the Freeborn County Bike-a-thon, Big Island Rendezvous, the Salvation Army and the Society for Crippled Children. He was a board member and treasurer of St. John’s Lutheran Home, secretary for the Freeborn County Co-op Oil, founder and president of the Schneider Service Society for 50 years, assessor for Pickerel Lake Township, secretary/treasurer of the Pickerel Lake Telephone Company and active in the Farm Bureau. Elmer loved to travel and visited many places of interest throughout the U.S., Mexico and Canada. He visited the headquarters of his and his sister Frieda’s mission field in India several times. He had a travel trailer that he and his sister Frieda would spend much time in at the Lake Okoboji Bible Camp.

Memorials are preferred to St. John’s Lutheran Home or the donor’s choice.