Funeral services for Elsie Bernadene Paulson, 89, of Albert Lea will be at 10:30 a.m. Thursday at Trinity Lutheran Church. The Rev. Curtis Zieske will officiate. Interment will be at Hillcrest Cemetery. Visitation will be from 5 to 7 p.m. today at Bayview/Freeborn Funeral Home and one hour prior to the service at the church. To sign the guest book, go to www.bayviewfuneral.com. 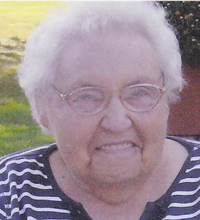 Elsie Bernadene Paulson was born on Aug. 22, 1922, to Harry and Sadie (Lane) Eschle in New Richland. She grew up in New Richland and graduated from New Richland High School. On Jan. 30, 1942, Elsie was united in marriage to Luther H. Paulson. The couple moved to Albert Lea in 1950. Elsie was employed at the Albert Lea Schools as a secretary for many years. She was a member of Trinity Lutheran Church, former 4-H leader, past president of the Eagles Auxiliary. Elsie was very active in the schools and had served as president of the PTO for many years. She enjoyed reading, doing crossword puzzles and time spent with her family.