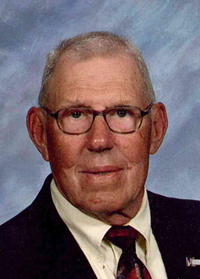 Elwood Truman was born on July 20, 1931, at his country home in Rake, Iowa, the son of Lewis Andrew and Amelia (Molskness) Lande. He grew up during the depression and attended numerous country schools before moving to Albert Lea in 1943. He was baptized at Bethany Lutheran Church in Fairbault County, Bricelyn. He was confirmed at Our Savior’s Lutheran Church in Albert Lea. Elwood graduated from Albert Lea High School in 1950, where he participated in basketball and baseball.

On July 10, 1952, he was drafted into the United States Army where he served in the 8th Infantry Unit. Elwood honorably served 16 months in Korea in the Pontoon Bridge Unit where his duties included building bridges and maintaining roads. He received the United Nations Service Medal, Korean Service Ribbon with two Bronze Stars and the National Defense Service Medal. He was honorably discharged with the rank of sergeant on June 9, 1954.

After his faithful service to his country, Elwood returned to Albert Lea where he worked at Enders Tool Company for 36 years, during which time he used only two sick days. During his years in Albert Lea he participated on many bowling and softball leagues and won many trophies. In 1987, Elwood retired and moved to Middle Cormorant Lake in Lake Park where he spent many wonderful years with his family and friends. He loved his time there very much and enjoyed maintaining the communal lake property that he shared with his brother Burt and his wife, his niece Diane and her family, and his nephew Duane. He was always available if you needed a helping hand to build or repair something. His love of fishing allowed him to spend many days on the water with his nephew and fishing buddy, Duane. He will always be remembered for his gentle nature and willingness to help anyone in need. He was a past national secretary at Our Savior’s Lutheran Church in Albert Lea and past trustee at Immanuel Lutheran Church in Audubon. He was a lifetime member of the American Legion.

Hobbies included hunting, fishing, bowling and working with wood. Elwood was an avid sports fan who enjoyed watching the Minnesota Twins, Vikings and Gophers wrestling teams. He loved the sport of wrestling so much that he spent 35 years attending the Minnesota State High School Wrestling Tournaments and also attended nine NCAA Division 1 Wrestling Tournaments with his brother, Darrel.

Elwood was a man with very strong Christian faith. Many times he commented that his years living at the lake were comparable to being in paradise. He had very few material possessions, but considered himself to have been very blessed by the Lord with a very wonderful, complete life. Elwood was a true example of how to live a Godly life.

Preceding him in death were his parents, Lewis and Amelia.

Visitation will be from 4 to 6 p.m. Sunday with a 6 p.m. prayer service at Faith & Hope Funeral Home, Fergus Falls, and continuing one hour prior to the services at the church. A service will be at 1:30 p.m. Monday at Immanuel Lutheran Church, Audubon. The Rev. David Thompson will officiate. Interment will be at Cormorant Lutheran Cemetery, rural Lake Park. Arrangements are entrusted with the Faith & Hope Funeral Home of Fergus Falls. Online condolences and video tribute at faithhopefh.com.