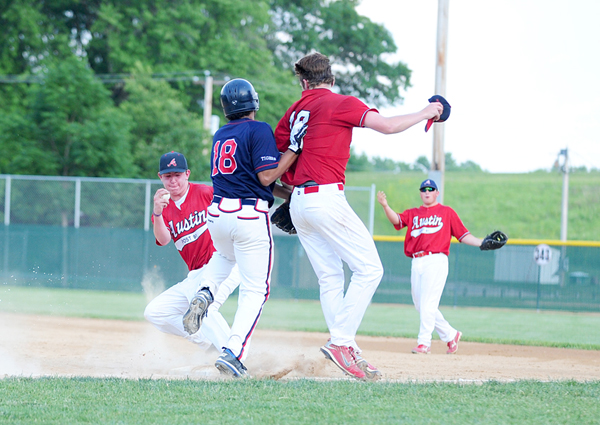 Albert Lea Legion’s Houston Sharpe plows into an Austin player who was interferring at first base on Monday at Hayek Field. -- Brandi Hagen/Albert Lea Tribune

The Albert Lea Legion swept over Austin on Monday 11-0 at home.

The Tigers scored seven of its runs in the bottom of the first inning. According to Tigers coach Jay Enderson the hits came from Cody Haaland, Logan Enderson, Derek Burkhard and Cole Sorenson. Enderson and Burkhard each hit a double and Sorenson hit a triple.

“After the first,” Enderson said. “The Tigers never looked back.”

Tigers pitcher Tyler Woodside played a strong game holding the Packers to three hits and struck out eight in five innings. He didn’t walk any of them.

“Woodside only threw 49 pitches in the five-inning win,” Enderson said. 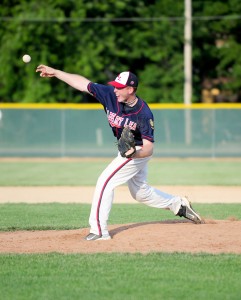 The Tigers picked up its remaining runs in the bottom of the third for an 11-0 lead.

Albert Lea finished the game in five innings with temperatures in the 90s.

Albert Lea’s next game is at the Snake Pit Tournament in Burnsville this weekend.

They will play three games beginning Friday night with a game against Oakdale.

Saturday night they will play their other two games. The first will begin at 5 p.m. against Excelsior and the second at 7:30 p.m. against Hopkins.

The Tigers next league game is scheduled for June 26 at Waseca at 6:30 p.m.