Fighting for a title 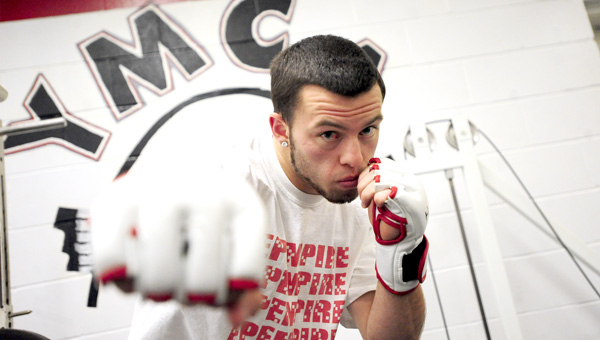 Chris Karge, an Albert Lea resident, has a fight scheduled in August for a chance at a mixed martial arts title at 145 pounds.

In August, just over a year after he started fighting, 21-year-old Chris Karge will be traveling to St. Croix, Wis., to fight for what could be his first title belt in Mixed Martial Arts.

“I don’t know what will happen if I win or lose this fight, but it’s going to be an experience,” Karge said. “I’m excited for it, but I will be nervous knowing that I have this chance to win the belt and I can keep it forever and hang it up on the wall.”

A fan of Ultimate Fighting Championship and a sports enthusiast, Karge wanted to give MMA fighting a shot. He decided he would try one fight and continue until he lost.

On June 10, 2011, Karge suited up for his first fight against Luis Becerra at a fight in Austin. Escorted by his 12-year-old brother Noah, Karge climbed into the cage and took out his 170-pound opponent in the second round with a knockout.

Because he did so well, Karge decided to keep going and won his next two fights.

His fourth fight was in Mankato against Dalton Albrent and he ended up with his first loss.

“I took that one really hard,” Karge said. “It was such a close match.”

Karge said at that point he didn’t know if he would continue fighting. With encouragement from his friends and family, Karge continued.

“There have been times he’s contemplated giving it up, but it’s an adrenaline rush for him and he enjoys it,” said Karge’s brother Brady Engelby. “He was always the kid pushing limits and creating a buzz.”

He went on to lose his next fight in the final 45 seconds and won his sixth fight in the second round giving him a 4-2 record.

Karge said he couldn’t have had this experience without his fans.

“I’ve had 20 to 40 people at every fight I’ve been at,” Karge said. “My fan base helps a lot because I don’t want to disappoint them when I go into a match.”

Karge said it takes a lot to be successful in the cage.

He has had to practice cardio, jiu jitsu, boxing, wrestling and mai thai.

If you don’t have cardio, you’re probably not going to last very long,” Karge said. “The punches and the kicks that you throw take a big toll on you. When you’re in there fighting someone, you get exhausted real quick. Those three minutes that you’re in there feel like an hour, they can feel like forever.”

He also said it doesn’t matter which opponent is bigger or stronger.

“If a wrestler stepped in there, he’d do all right if he was able to wrestle the whole time. A boxer would do good if he could stand up the whole time,” Karge said.

The key to winning matches is to be well-rounded. Karge said prior to fighting he never really had background in any of the categories he has had to work in.

Karge has spent the last year training with Andrew Lenway, an Austin resident.

“He’s determined and he has a good head on his shoulders. If you met him on the street, you wouldn’t think he was a cage fighter because he’s pretty down to earth,” Lenway said. “He’s had a few set-backs, but he won his last fight, so his confidence is back. The fight is just another day, another opportunity for him to go and see where he ranks among some of the best there are to offer.”

Karge said there is always a chance to go pro, but he hasn’t decided if it’s an option for him yet. For now, he’s training extra hard for August.

For more information on MMA fighting or to follow Karge, visit mixedmartialarts.com, minnesotacombativesports.com or mnmmanews.com.