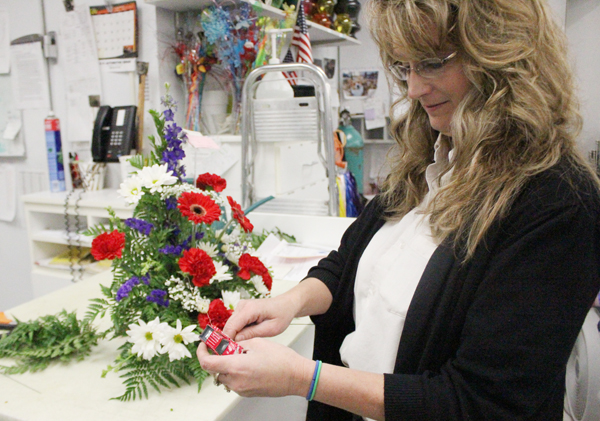 Cheryl Overland works on a floral arrangement recently at Hy-Vee in Albert Lea. Overland won an award for her ability to make displays from the magazine Super Floral Retailing. -- Kelli Lageson/Albert Lea Tribune

Albert Lea’s own Hy-Vee florist has won an award for her cross-merchandising skills from a national magazine. 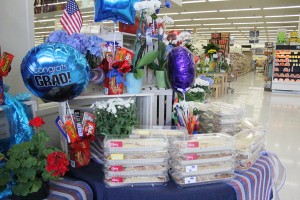 Overland coordinated this recent display with other workers at Hy-Vee. She and a team design and plan each display.

Cheryl Overland, floral manager at Hy-Vee, is being recognized by Super Floral Retailing magazine for a display she coordinated for Boss’s Day last fall. Overland said she and the other managers often try to cross-merchandise displays, which means using items from all different departments like floral arrangements, baked goods and products off shelves. The magazine honors supermarkets and mass-merchants all over the U.S. and Canada.

“We have a management team who put together a plan for displays,” Overland said.

For the Boss’s Day display Overland met with other managers and they decided to feature Werther’s candies. The bakery used the Werther’s candies in cookies and bars, bags of the candies were displayed and fall-themed floral arrangements adorned the display as well.

“I even put the candies in vases,” Overland said. 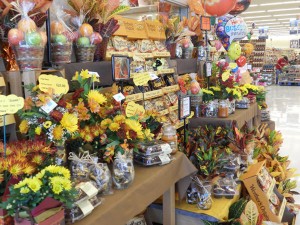 Displays have to be made often and usually only last one to two weeks. Some are more elaborate than others, but Overland said they always try to incorporate the different departments and make something that draws customers in.

Overland will travel to Florida this weekend to attend the International Floriculture Expo. She said Hy-Vee managers were excited about the award she and two other employees in the company won, which is why the company is sponsoring the trip.

“It’s a trade show for florists so that’s going to be really cool to see,” Overland said.

Overland said she was excited to see that three different Hy-Vee employees won awards for excellence in merchandising from the national magazine. While Overland won for cross-merchandising, two others won the best signage award and the grand prize.

“It says a lot about our company that we won while up against big stores,” Overland said.

She said she enjoys that each store can use their own creativity when making displays and choosing specials to feature.

While all departments in the store do their own displays, the one at the front of the store is a team effort. Overland said that though she’s the one who puts it all together and builds it, that there’s always other members contributing and brainstorming.