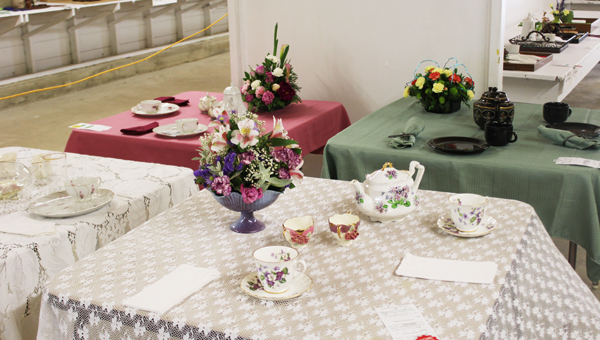 One section was “Table Artistry,” and each display must have contained a table and a place setting of some sort. -- Colleen Thompson/Albert Lea Tribune

NORTHWOOD, Iowa — A fair would not attract fair-goers without a couple of special offerings. The Worth County Fair has plenty of attractions to keep the public pouring in. The Green Thumb Garden Club’s Horticulture Exhibit is one of those eye-popping attractions.

“Creativity is always highly recommended in our designs, and each one submitted brings its own creative touch,” said Angie Wilkins, the Green Thumb Garden Club’s district director.

The Green Thumb Garden Club is a federated program that has been in Northwood for over 10 years. The 14-member club includes President Jean VanVeldhuizen and General Chairwoman Julie Robb. The Garden Club is responsible for taking care of the Butterfly Gardens at the north end of the fair and maintaining the greenery at the rest area north of the city on U.S. Highway 65. The club also holds a plant sale every year the first weekend in May and recognizes the Blue Star Memorial Marker program by selling quilts to raise money for veterans. In addition, the Garden Club displays hundreds of floral and other natural arrangements at the Worth County Fair each year.

The Floral Hall housed two different divisions of greenery during the 2012 Worth County Fair. The horticulture division required that each plant was grown by the submitter. The design division, on the other hand, involved more creativity and extra additions, such as props and dyes. This year’s theme for the design division was “Around the World.” This included five different sections.

The third was “Designer’s Choice.” This gave the creators freedom as to what props and materials were used. Oriental traditions, “Building a New Abu Dhabi” and “Uff Da” (Scandinavian) were the individual classes.

The fourth section was “Table Artistry.” Each display must have contained a table and place setting of some sort. The “French Ooh La La” plants included a tray of some sort, the “German Octoberfest” display contained enough drinking mugs for four, and the “English Tea” table was arranged for two.

The fifth and final section was the “Petites.” The Holland Horizon class contained five-inch plants while the Isle of Ireland and Australian Outback plants were eight inches.

“We tried to include as many different cultures as we could,” Wilkins said.

This year, three qualified judges drove all the way from Dike, Decorah and Greene to judge the exhibits on June 13. The judges spent 4 1/2 hours evaluating each and every plant. For a display to achieve a ribbon of any kind, all three of the judges had to agree. The judges observed more than just the beauty of the plants.

“They looked at the line of design and how well the observer’s eye could move from the top to the bottom,” Wilkins said.

A special award, called the People’s Choice Award, was voted on by viewers. The piece with the most votes is announced as the winner by Saturday night of the fair each year.

When submitting a plant, entries are limited regarding what they can and cannot do. No weeds from the Iowa Noxious Weeds list are allowed, including dandelions and Queen Anne’s lace. Plants that contain spots, holes and wind marks are highly discouraged. Entries in the horticulture division are unlimited, although only one plant can receive ribbons. The design division, however, has limited entry to one in each of the 15 categories.

Wilkins submitted one to every category. One of the ribbons she won was a first-place ribbon for her eight-inch submission in the “Isle of Ireland” category.

One of the big winners this year was Mavis Stevens. She received first places in her submissions in “Building a New Abu Dhabi,” “Uff Da,” “America the Beautiful,” “African Safari” and “Australian Outback.”

“She’s been doing this for quite a while, and it shows,” Wilkins said.

Though anyone from the public can make a submission, most of the entries end up being by club members.

“Ninety-five percent of submissions in the design category are by members,” Wilkins said. “Usually the horticulture exhibit has an even amount of member and public entries.”