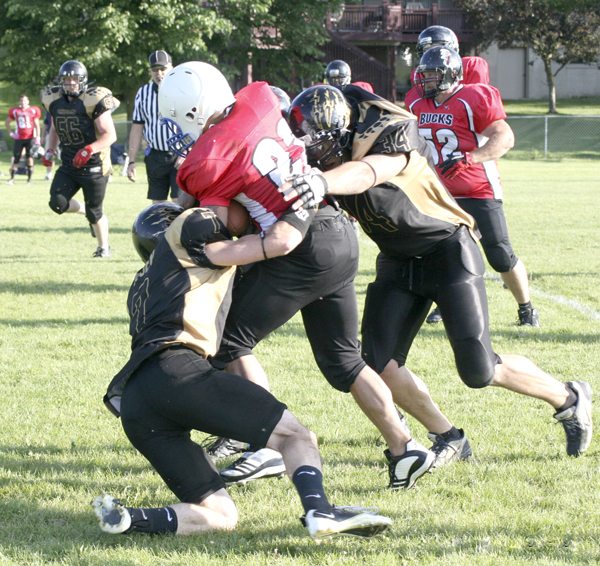 After a rough start, the Grizzlies came out on top of the North Iowa Bucks on Saturday night. When the final buzzer sounded the score was 48-16. 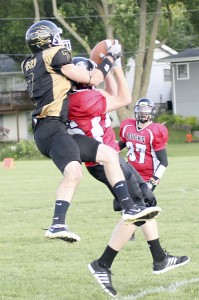 The Grizzlies got the ball first and fumbled the snap on the second play of the game, and the Bucks recovered.

The Grizzlies defense stood strong preventing the Bucks from scoring and forcing a turnover on downs. On the Grizzlies’ very next play quarterback Paul Ciochetto threw a ball intended for Tony Tolbers that was intercepted by Patrick Jackson of the Bucks.

In the Grizzlies’ first three plays they had turned the ball over twice.

With a short field ahead of them, the Bucks started to move the ball, and put the first points on the board with a pass from Bucks quarterback Greg Falls to Marquis Shaw. Falls then tacked on a two-point conversion with a quick pass to Patrick Jackson.

Halfway through the first quarter the Grizzlies trailed the Bucks 8-0.

The Grizzlies answered immediately when Levi Fossen returned the ensuing kickoff 80-plus yards for a touchdown. Grizzlies kicker Justin Wolf made the extra point making the score 7-8.

The Grizzlies drove down the field with the tandem of Steven Salinas and Mikey Salinas running the ball. The Grizzlies were poised to score from the one-yard line at the end of the first quarter. 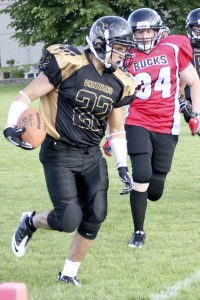 Steven Salinas holds onto the ball Saturday during the Grizzlies game against the North Iowa bucks.

On the first play of the second quarter, running back Steven Salinas scored a touchdown on an outside toss, and Wolf kicked the extra point making the score 14-8 in favor of the Grizzlies.

The Buck tried to answer and drove the ball down into the red zone, but the drive ended prematurely when Grizzlies cornerback Fossen intercepted the ball on the goal line and returned it to the 30-yard line.

The Grizzlies moved the ball down the field effectively with a combination of runs and short passes, capped by a 15-yard touchdown run by fullback Mikey Salinas. Wolf again kicked the extra point making the score 21-8.

The Grizzlies’ defense held the Bucks to their own side of the field and forced a punt.

Once again the Grizzlies marched down the field completing several short passes to tight end Tolbers and ran up the middle finished by another touchdown run for Mikey Salinas and a successful extra point kick by Wolf. The half ended with the Grizzlies leading 28-8.

The Bucks got the ball first in the second half, but the Grizzlies stopped them on three consecutive plays and forced a punt that rolled to a stop short of mid field. The Grizzlies came out running again, and Mikey Salinas proved he was unstoppable as he plowed down the field and scored his third rushing touchdown of the game. Wolf tacked on another extra point and the Grizzlies led 35-8.

The Bucks started trying to force the ball down the field to covered receivers, and linebacker Trevor Haugh reaped the benefits as he intercepted a pass from Falls that was tipped by linebacker Mike Ratcliff and returned it 40-yards for a defensive touchdown. Wolf kicked his sixth consecutive extra point, and the Grizzlies widened the lead to 42-8. On the ensuing kickoff, Mikey Salinas forced Bucks return man Jackson to fumble and Grizzlies cornerback Travis Marth scooped it up and pranced into the end zone. Wolf missed the extra point and the scoreboard read 48-8 at the end of the third quarter.

In the fourth quarter, the clock moved to running time because of the excessive score differential, and the rest of the game moved very quickly.

The Grizzlies defense continued to keep the Bucks out of scoring position.

Late in the fourth quarter the Grizzlies attempted to punt from their own 30 and a bad snap resulted in a turnover on downs at their own 10-yard line.

The Bucks capitalized and scored a touchdown and two-point conversion with the same pass play from Falls to Jackson.

At the final buzzer the scoreboard read Grizzlies 48, Bucks 16.

Next week the Grizzlies take on another new team in the league, the Dodge Center Outlaws. It will be the last regular season home game of the year, and kickoff is scheduled for 6 p.m. on Saturday at Southwest Middle School Field.