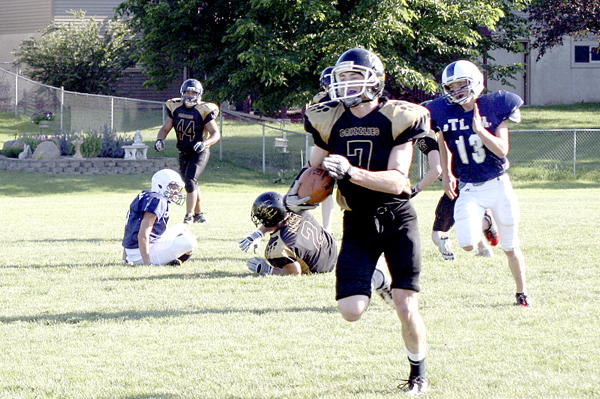 Levi Fossen runs away with the football at Saturday’s Grizzly game against Dodge Center. -- Melissa Schmidt/For the Albert Lea Tribune

The Albert Lea Grizzlies dominated the Dodge Center Outlaws in the heat on Saturday night.

In the end, the Grizzlies had outscored the Outlaws 58-0.

Early in the Outlaws’ opening possession Grizzlies’ defensive end Anthony Ingram forced a fumble that was recovered by defensive back Nick Atwood.

The Grizzlies picked up where they left off last week running the ball and scored the first touchdown of the game with a five-yard run by full back Mikey Salinas.

The two-point attempt was no good and the Grizzlies led early 6-0.

The Outlaws fumbled the ensuing kickoff and the Grizzlies recovered.

A few plays later the Grizzlies scored a touchdown with a 25-yard pass from quarterback Paul Ciochetto to tight end Tony Tolbers, again the two-point attempt was no good and the Grizzlies had extended their lead to 12-0.

The Outlaws started putting some plays together, moving the ball with some quick short passes and moved down the field.

The Grizzlies defense put a stop to the drive when defensive back Levi Fossen intercepted a pass over the middle and returned it to the Outlaws’ 20-yard line.

On the next play the Grizzlies scored another touchdown with a 20-yard sweep to the outside by running back Jason Kuipers.

They added a touch of déjà vu with Kuipers running in the two-point conversion with the exact same play. The scoreboard read 20-0.

The Outlaws were unable to put together a sustained drive against the Grizzlies’ defense and ended up punting from deep inside their own territory on their next possessions.

The Grizzlies continued to pound the ball down the field with Salinas and Kuipers.

The Grizzlies scored another rushing touchdown with a fullback dive to Salinas on the five-yard line.

Ciochetto hooked up with receiver Dustin Peterson to tack on the two-point conversion and make the score 28-0.

The Grizzlies defense held strong again and the Outlaws were forced to punt.

On the first play of the Grizzlies’ next drive Ciochetto hooked up with Tolbers for a 60-yard touchdown pass.

On the two-point conversion attempt Kuipers caught a deflected pass that was intended for Gerdes.

At the end of the first quarter the Grizzlies had already racked up five touchdowns and the scoreboard read 36-0.

In the second quarter the clock moved from stop time to running time to keep the game reasonable in the heat.

The Outlaws turned the ball over on downs on their next drive as they tried to reach the end zone on fourth down after they moved the inside the Grizzlies’ 30-yard line with a couple of long completions.

The Grizzlies went to work again this time with Shay Weller running the ball, and the Grizzlies finished the drive with a five-yard pass from Ciochetto to Peterson. The two-point conversion attempt failed and the score was 42-0 at the half.

The Grizzlies got the ball first in the second half, and an onside kick attempt gave them a short field to start with. They drove down the field once again, chewing up the clock, and capped the drive with a 10-yard touchdown pass from Ciochetto to Gerdes.

Ciochetto found an open Tolbers in the end zone for the two-point conversion.

At the end of the third quarter the score was 50-0 in favor of the Grizzlies.

The Outlaws were again forced to punt from deep in their own territory, and the Grizzlies ended up with the ball just short of midfield.

Digging into their bag of tricks the Grizzlies pulled out the Fumblerooski card, and center Spencer Niebuhr rumbled, bumbled and stumbled 53-yards for the touchdown.

Offensive guard Matt Mirowski lead the way and threw a key block on the goal line to secure the touchdown.

Ciochetto found Fossen in the endzone to add another two points making the score 58-0.

On their last possession the Outlaws tried to force the ball down the field again, and linebacker Trevor Haugh capitalized with an interception, effectively ending the game.

Next week the Grizzlies (5-1) travel to take on the Buffalo Ridge Wildcats (4-1) in Lake Benton. Kickoff time is scheduled for 7 p.m.

The next Grizzlies home game will be a playoff game on June 30 against an opponent that has yet to be determined.