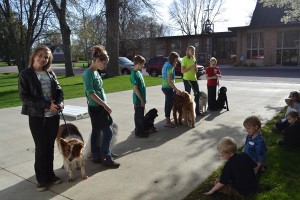 Members of the Hayward 4-H Club presented their project along with their dogs at the April meeting.

The Hayward 4-H Club met for its monthly meeting on April 15 at the Hayward Town Hall. President Derek Wagner called the meeting to order. The group talked about the Share the Fun talent show and how well it went, as well as the group’s successful club fundraiser it had at the March Madness Cattle Show. The club also discussed Hayward Days, which will be coming up in July. During the meeting the cloverbuds did a tree coloring project and Home Depot generously donated four pine trees in honor of Arbor Day. Each cloverbud was given a tree to take home and plant. The Louters and DeHaan families served refreshments. Following the meeting and refreshments several 4-H members did project talks. Nathaniel DeHaan presented his fair project. Pieter and Lindsay Louters, Betsy and Adeline Wagner, and Emma and Noah Iverson all did their project talk with their dogs. The next meeting would be May 20 at the Hayward Town Hall. 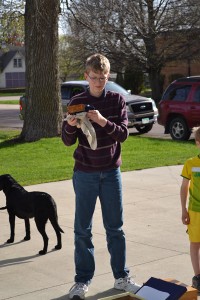 A member of Hayward’s 4-H Club presents during the April meeting.

The Hayward 4-H Club met for its monthly meeting on May 20 at the Hayward Town hall. Just before the meeting the 4-H kids had a fun game of floor hockey. After that, Secretary Jenni Golbuff called the meeting to order.

They also discussed entering a Hayward 4-H Club float in the Third of July Parade to recognize its 100th year as a club, and to celebrate Independence Day with the community.

During the meeting the cloverbuds were busy doing a fun rub coloring project. The Iverson and Weigel families served refreshments. Following the meeting Robert Weigel and Emma Iverson did a project talk about training and showing dogs. Weigel brought his dog for his project talk, and to also demonstrate some of the obedience commands he has taught his dog to do. The next meeting would be on June 10 at the Hayward Town Hall.