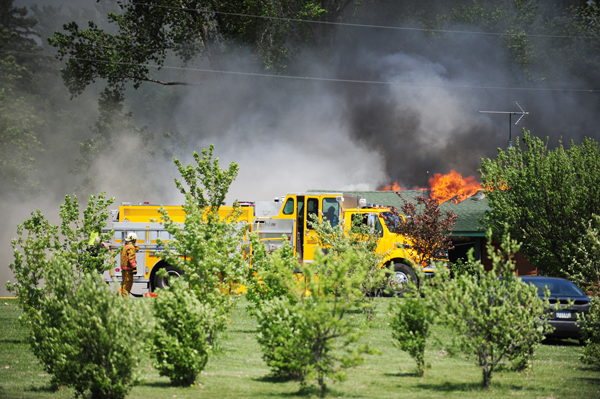 A house burns after an explosion at 29642 660th Ave. in Freeborn.-- Danielle Boss/Albert Lea Tribune

The man, identified as Ralph William Yotter, suffered burns to the face and body and was flown by helicopter to a hospital. 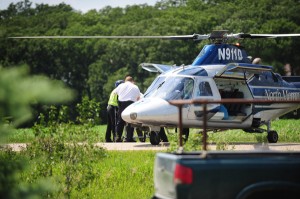 His condition as of Friday evening is unknown.

According to Freeborn County Sheriff Bob Kindler, ambulance crews and firefighters responded to 29462 660th Ave. just after 1:20 p.m. after receiving a 911 call from Yotter’s wife, Patricia, who stated her husband had been injured in an explosion.

It is unclear where she was at the time of the explosion, but she did not sustain burns. She was transported by ambulance to Mayo Clinic Health System in Albert Lea for other injuries.

Freeborn Fire Chief Steve Siepp said when firefighters first arrived on scene, they found a small amount of flames that quickly spread throughout the house.

At one point a majority of the structure was engulfed in flames.

Firefighters from Freeborn, Alden, Hartland and Manchester had the large blaze under control about 15 minutes later. By 2:20 p.m. the fire had been reduced to a smolder.

The cause and origin of the explosion and fire has not been determined.

Siepp said a representative from the State Fire Marshal’s Office came down Friday afternoon to begin investigating in conjunction with the Freeborn Fire Department, and authorities will continue to study the incident on Monday.

The structure is a total loss.

Kindler said the Yotters had recently sold their property and were awaiting closing on the property. They were not living there at the time of the explosion.

See a gallery of photos from the fire here.