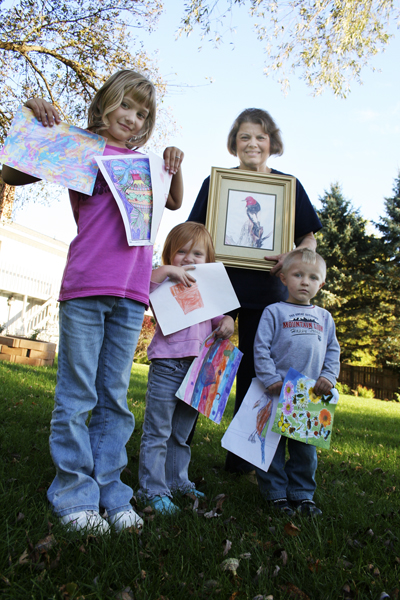 Suzanne Rechtzigel was featured in the Albert Lea Tribune in October 2010 for sharing her art skills with the children in her care. She is active in the local arts scene. -- Tim Engstrom/Albert Lea Tribune

The Minnesota Department of Human Services has suspended operations of an in-home child care center in Albert Lea pending the completion of a police investigation.

The suspension follows the death of a 3-month-old baby boy on Friday who attended the day care facility. According to police, the baby was reportedly brought into Mayo Clinic Health System in Albert Lea Wednesday evening after he was having trouble breathing. He died at St. Marys Hospital in Rochester two days later.

According to the state licensing divison’s website, the license for Suzanne Rechtzigel is listed as being under “temporary immediate suspension.”

The suspension order to Rechtzigel states the Department of Human Services found that the health, safety and rights of children in Rechtzigel’s care were in “imminent risk of harm.”

Rechtzigel, who operated the child care center at 1919 Brookside Drive, defended her innocence.

“They haven’t finished the investigation, so I feel it’s not right and it’s not correct,” she said.

Albert Lea Police Chief Dwaine Winkels said Monday though there were no obvious signs of foul play, the department is investigating the death based on the child’s age, and authorities are awaiting the results of the autopsy.

Rechtzigel said she has already written a letter to appeal the suspension. She has five days to file the appeal.

Rechtzigel said a mother who picked up her child at the same time as the baby’s parents told police the baby looked “perfectly healthy” when he left Rechtzigel’s house at about 1:30 p.m. last Wednesday. Rechtzigel said the child wasn’t taken into the emergency room until about 6 p.m. She questioned what took place in the more than four hours after the baby was out of her care.

She had been watching the baby for two to three weeks prior.

The baby’s parents could not be reached for comment.

She has operated her in-home child care for 30 years.

Buhmann said as the suspension is now in place, families whose children had been under Rechtzigel’s care are shuffling to find new child care for their children. He said all of the impacted families have been notified of the suspension.

A press release about a similar suspension at a Brooklyn Center child care center in February stated “temporary immediate suspension” is the most serious licensing sanction that can be taken against a child care center. Unlike other sanctions, this suspension takes effect immediately, with the appeal being heard after the center is closed, rather than before.

The suspension of the Brooklyn Center facility was only the third such action the department had issued in more than 10 years to a child care center in Minnesota, according to the release.

According to Jon Siess, communications spokeman with the Minnesota Department of Human Services, Rechtzigel’s license was placed on probationary status for one year in February of 1994 “due to inadequate supervision of children resulting in biting incidents between children.” He said the incidents resulted in “substantiated neglect and hazardous items including screwdrivers and a razor that were accessible to the children.”

Rechtzigel said the claim was ultimately dismissed after officials found that the biting had been done by one of the parents of the children.

Look to the Albert Lea Tribune for more information as it becomes available.