When I was young, I felt like time stood still. My parents would say, “Time sure flies by,” and I never understood how they thought it went by so fast. To me, the school year seemed like forever and I would wait so long for Christmas it seemed like it came every other year. 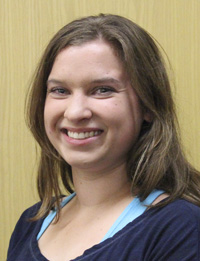 Six weeks ago I began interning with the Tribune and when I started it felt like six weeks was going to be a long time. Now I am already done, and can look back at what I did over the last six weeks.

I owe a lot of my experience to Brandi Hagen, the sports editor. She let me jump right into covering softball and baseball games and writing feature stories for the sports page.

I am majoring in journalism at Bowling Green State University in Ohio, with the hope of becoming a sports reporter. I am doing a double major in sports management because I knew I wanted to work with sports and also with writing.

In 2007 I took a journalism introduction class at Riverland Community College, and after that class I realized how much I enjoyed journalism. Not only did I enjoy journalism but, more specifically, sports journalism. It was at that time that I wrote a profile story about Adam Kirsch, a junior varsity hockey player, and I discovered how much I liked writing sports profiles.

While interning with the Tribune I was able to write about Lindsey Horejsi making the Olympic swimming trials, which was so much fun. While writing that story I got to feel the stress of trying to make the trials, see the joy on Lindsey’s mom’s face when she told me that Lindsey had made the cut, and now I anxiously await the trials to see how she performs.

I realized as a sports reporter I got attached to the teams and athletes I followed and wanted to see them to succeed.

I spent two days in Becker following United South Central at the state golf tournament. Since I have spent the last two years in Ohio, I did not know how well the USC boys’ golf team was doing until I went to the tournament.

After bouncing from one hole to another at Pebble Creek Golf Club and talking to the boys’ parents, I began to feel the excitement they were feeling, the excitement of winning. Following them and seeing how close they are to a championship have made me want to come back next year and following them again.

Being able to cover high school spring sports, I saw a completely different side to sports. I was able to actually talk to the team coaches and players and share the joy of winning and disappointment of losing.

As I have gotten older, I have realized time not only flies by, but it seems to take a rocket. One minute I was a senior in high school wondering what I should major in, and now I am close to graduating with three degrees.

Six weeks flew by because in reality it is a short time.

Rebekah Dyvig is a senior at Bowling Green State University in Bowling Green, Ohio, near Toledo. She completed an internship with the Albert Lea Tribune on Monday.