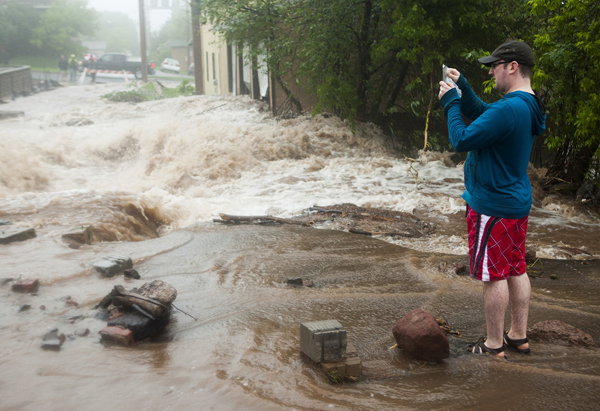 DULUTH — Exhausted and depressed, Michelle Henry sat in a Red Cross shelter, filling out paperwork and worried about what she’ll find when she is able to return to her flooded Fond du Lac home. 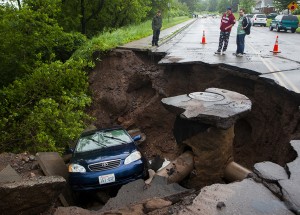 Henry, her boyfriend and their two kids were among the 250 residents told to evacuate their neighborhood Wednesday after torrential rains dumped as much as 10 inches in Duluth and the surrounding area, washing out roads, flooding a local zoo and prompting the governor to declare a state of emergency.

“It’s hard,” Henry, 26, said Wednesday night after her family walked into the shelter carrying a pile of pillows and blankets. “It’s not fun. We were soaked, but other than that, we’re OK. … I’m more worried about the pictures and stuff we can’t replace — the baby pictures, baby books.”

She hoped she’d be allowed to return to her home to assess the damage on Thursday, when Gov. Mark Dayton also planned to tour the deluged northeastern Minnesota city.

An 8-year-old boy who was swept about six blocks through a culvert in Duluth suffered some scrapes and bruises: A “miracle out of this whole disaster,” Louis County Undersheriff Dave Phillips said.

The heavy rains also sent workers at the Lake Superior Zoo scrambling before dawn to find animals that escaped from their enclosures in the flood. Workers safely recovered two seals and a polar bear, but about a dozen animals from the barnyard exhibit perished under water.

Furniture from zoo exhibits lay scattered about the zoo, and water marks showed flooding that reached as high as 14 feet off the ground in places, said Peter Pruett, the zoo’s director of animal management.

Pruett learned of the disaster with an early morning phone call alerting him to a seal on a city street. He went to the scene and found the harbor seal, Feisty, corralled by three police cars. Pruett got a piece of plywood and nudged Feisty along, about a half a block, back to the zoo.

As he was walking with Feisty, he knew her escape could mean trouble, “because if the seal’s out, the polar bear very well could be out too,” he said.

Zoo employees were called in and began searching for animals in the darkness. One employee found the lions and tigers were still in their exhibits — a relief. But Berlin, the polar bear, wasn’t in sight.

“A dangerous animal is out and it’s the middle of the night, and you cross your fingers and you pray to whomever you want to pray to that she’s still there and not terrorizing some other place,” Pruett said.

Thankfully, a zookeeper spotted the bear about 5 a.m. atop the rock wall that encloses her exhibit. The zoo vet and a police officer approached her in a squad car, enabling the vet to safely shoot her with a tranquilizer gun.

He said Berlin was groggy and dirty from her ordeal a few hours later but otherwise OK.

After the bear was subdued, zoo officials got a call that Vivian, the other harbor seal, was about a half mile away on a trail. Officials picked her up safely too.

The zoo was closed Wednesday and will stay closed until officials determine all the pathways, bridges and other amenities were safe. It will take some time to assess the damage, Pruett said.

“We filled up like a bathtub, and it should not have been that way,” he said. “Everything was going so fast. You have a plan, but your plan doesn’t take into account the biblical proportions.”

Don Ness, Duluth’s mayor, said it may take time for the damage to become fully apparent. He said the volume of rain in a short period puts a tremendous amount of stress on sewer and road systems. The National Weather Service said there was a 50 percent chance of more rain on Saturday.