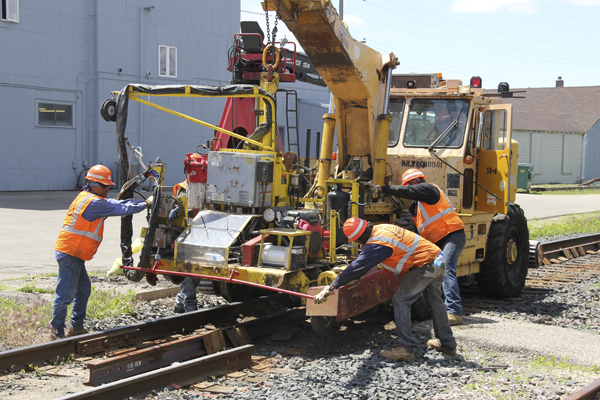 Workers with Colo Railroad Builders position a machine onto a new track Wednesday. The machine coats stakes, then pounds them into the ground. -- Tim Engstrom/Albert Lea Tribune

Crews have been working on the railroad, all the live-long week. And they will be through next week, too.

Tracks are being replaced at three crossings, and all are just north of Front Street at Washington Avenue, Pearl Street and Euclid Avenue.

He said they had hoped to be finished this week, but they are finding more to replace than anticipated. That has resulted in the work taking another week.

For the safety of the railroad construction workers, the city is urging motorists to take alternative routes when possible in the area between Euclid Avenue and Broadway Avenue along Front Street.

The Dakota, Minnesota & Eastern Railroad began operations in 1986. It purchased the I&M Rail Link in 2002 and renamed it the Iowa, Central & Eastern Railroad. The company became a subsidiary of the Canadian Pacific Railroad in 2008.

The DM&E line in Albert Lea runs east to Austin and west to Fairmont. According to the Minnesota Department of Transportation, the DM&E line through Albert Lea in 2009 had an average of three trains per day. They travel at a speed of up to 40 mph.

The Albert Lea Engineering Department can be reached at 377-4325.